Quote of the Week by Ruth Bernhard 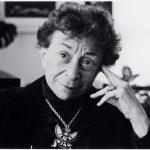 “What the human eye sees is an illusion of what is real. The black and white image transforms illusions into another reality.” —Ruth Bernhard (1905-2006)

Although she is most often recognised for her photographs of nude women, Ruth Bernhard’s main aspirations revolved around the formal discipline of creating abstract shapes and sculptural masses using composition, light, and shadow. After her graduation from the Berlin Academy in 1927, she took on commercial jobs, including an internship working under Ralph Steiner with the magazine The Delineator. In 1935, she met Edward Weston and became deeply inspired by his work. He became her mentor, under whom she studied for years. Later, she became a part of the Modernist West Coast Photographers movement and she joined Weston, Ansel Adams, Minor White, Imogen Cunningham, Wynn Bullock, and Dorothea Lange in the f/64 group. Bernhard lectured and taught master classes at universities throughout the United States, and published several books of her work. Her photographs are held by the San Francisco Museum of Modern Art in San Francisco, CA; The Metropolitan Museum of Art in New York, NY; the Museum of Fine Arts in Houston, TX; and the Victoria and Albert Museum in London, UK; among others.