Quote of the Week by Roy DeCarava 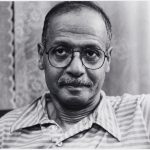 “My pictures are immediate and yet at the same time, they’re forever. They present a moment so profoundly a moment that it becomes an eternity…. It’s like the pole vaulter who begins his run, shoots up, then comes down. At the peak, there is no movement. He’s neither going up nor going down. That is the moment I wait for.” —Roy DeCarava (1919-2009)

Roy DeCarava was a photographer best known for chronicling the daily life of the Black community and famous Jazz musicians in his hometown of Harlem, New York during the Harlem Renaissance. His most famous works include Graduation and John Coltrane, which were both featured in his book The Sweet Flypaper of Life, a collaboration with Langston Hughes. DeCarava began his career as a painter, using a camera only to record images to paint later. Becoming aware of the limitations faced by Black painters, he was eventually drawn to the immediacy of photography and shifted gears. DeCarava’s shift to photography was also a response to the Civil Rights Movement, and came from a desire to represent the Black community in an artistic light. In 1938, DeCarava was awarded a scholarship to the Cooper Union School of Art. He studied there for two years, before attending the Harlem Community Art Center, where his peers included Romare Bearden, Jacob Lawrence, and Langston Hughes. For his final year, he attended the George Washington Carver Art School, where he learned alongside the social realist Charles White. His photographs can also be seen in the MoMA, the Whitney, and the Smithsonian American Art Museum.