Quote of the Week by Ralph Eugene Meatyard 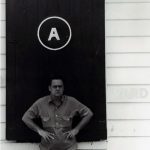 “The camera is an unsophisticated mechanical instrument which, like a mirror, reflects passively without a conscience. The artist must supply the conscience.” —Ralph Eugene Meatyard (1925-1972)

Ralph Eugene Meatyard was an American photographer known for his enigmatic portraits and use of multiple exposures. Though he did not gain much recognition during his lifetime, the artist’s haunting images of masked children have since established him as a key figure in American photography. Born in Normal, IL, he joined the Navy during the end of World War II without seeing any combat. After returning from the war, Meatyard studied to become an optician and shortly thereafter accepted a job at an optical firm in Lexington, KY. He first came into contact with photography in 1950 through his job, which sold both optical and photo equipment. After purchasing his first camera, Meatyard joined the Lexington Camera club and learned many of the basics of the medium from another club member named Van Deren Coke. The artist continued his education in the mid-1950s, when he attended a summer photography course taught by Henry Holmes Smith and Minor White at Indiana University. In the years that followed, he began to incorporate his interest in Zen philosophy and jazz music into his practice. Today, his photographs are held in the collections of the Metropolitan Museum of Art in New York, the Smithsonian American Art Museum in Washington, D.C., and the Walker Art Center in Minneapolis, among others.