Quote of the Week by Mary Ellen Mark 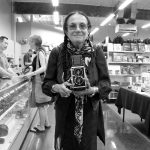 “I don’t think you’re ever an objective observer. By making a frame you’re being selective, then you edit the pictures you want published and you’re being selective again. You develop a point of view that you want to express. You try to go into a situation with an open mind, but then you form an opinion and you express it in your photographs. It is very important for a photographer to have a point of view that contributes to a great photograph.” —Mary Ellen Mark (1940-2015)

Mary Ellen Mark was born in Philadelphia and earned a BA in painting and art history and an MA in photojournalism, both from the University of Pennsylvania. Some of her most celebrated work documented the plight of the dispossessed, whether psychiatric patients of the Oregon State hospital for her classic book Ward 81 (1979) or the street prostitutes of Bombay, for Falkland Road (1981). Her work was published in numerous publications including LIFE, The New York Times, Vanity Fair, The New Yorker and Rolling Stone, among others. She has been bestowed with multiple awards including the Cornell Capa Award (2001), the Infinity Award (1997), the Erna & Victor Hasselblad Foundation grant (1997), and the John Simon Guggenheim fellowship (1994).