Quote of the Week by Martine Franck 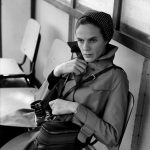 “A photograph isn’t necessarily a lie, but nor is it the truth. It’s more of a fleeting, subjective impression. What I like most about photography is the moment that you can’t anticipate: you have to be constantly watching for it, ready to welcome the unexpected” —Martine Franck (1938-2012)

Martine Franck studied art history at the University of Madrid, then at the Ecole du Louvre in Paris, where she presented a thesis on “the influence of cubism on sculpture”. She began her career as a photographer as the assistant of Eliot Elisofon and Gjon Mili at LIFE magazine. She was part of the first Vu agency in 1970 and helped found the agency Viva two years later. She joined Magnum in 1980, where she made portraits of artists and writers, but her main focus was humanitarian reportages. She photographed every production of the Théâtre du Soleil since its founding, and in 1985, began collaborating with the association Little Brothers of the Poor. In 2000, Franck collaborated with Fabienne Strouvé on the film Retour en Irlande avec Martine Franck, photographe (Return to Ireland with Martine Franck, photographe, France 3). Along with Henri Cartier-Bresson, she established the Fondation Henri Cartier-Bresson, which was officially recognised in 2002, and became its President in 2004.