Quote of the Week by Mark Power 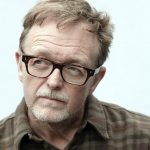 “Now that everyone in the developed world seems to own some form of camera, a different space has opened for documentary photographers. It’s a space free from specific events, where there are different expectations, where it is first and foremost about ideas. Now we can all take pictures, with varying degrees of ability, it’s what we do with our cameras that counts.”  —Mark Power (1959)

Mark Power is known as one of the forerunners of British photography. Known for his seminal work exploring the far-flung locations, Power has adeptly expressed the peculiarities of social culture in places as varied as Britain, Poland. and America. Some of his notable commercial collaborations include a commission by Airbus (2003-2006) to document the construction of the largest passenger plane ever built, the Airbus A380. He has also documented the construction phases of the Millenium Dome, The Treasury, Kings Cross station and more recently the new distillery of The Macallan. His work has been seen in numerous galleries and museums across the world and is in several important collections, both public and private, including the Arts Council of England, the British Council, the Victoria and Albert Museum, Los Angeles County Museum of Art, Milwaukee Art Museum, and Marrakech Museum of Photography and Visual Art.