Quote of the Week by Margaret Bourke-White 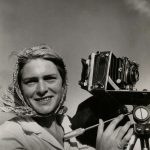 “As photographers, we live through things so swiftly. All our experience and training is focused toward snatching off the highlights… That all significant perfect moment, so essential to capture, is often highly perishable. There may be little opportunity to probe deeper.” —Margaret Bourke-White (1904-1971)

Margaret Bourke-White was a landmark American photojournalist. Remembered as the first female war correspondent and the first foreign photographer permitted to document Soviet industry, she captured countless iconic images of 20th-century life, conflict, and the politicians at its center. At the beginning of her career, she established a studio in Cleveland, where she specialised in architectural and industrial photography. In 1929, she changed her name to include Bourke, her mother’s maiden name, in order to seem more professional while pursuing photojournalism at the Fortune magazine. Over the following decades, she worked for Life magazine, documenting the Dust Bowl in the American heartland, and later the concentration camps left by the Nazi regime. One of her most iconic pictures came after the World War II, when she visited India and captured Mahatma Gandhi reading peacefully in his home, mere hours before his assassination in 1948. Her works are in the collections of The Museum of Modern Art in New York, the Rijksmuseum in Amsterdam, and the Cleveland Museum of Art, among others.