Quote of the Week by Marc Riboud 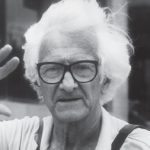 “Doubt always hovers nearby, but I take photographs the way a musician hums. Looking is like breathing. So when luck turns my way and offers me a good picture, joy is surely high.” —Marc Riboud (1923-2016)

Before turning to photography, Marc Riboud worked as an engineer till 1951. In 1952, he moved to Paris and thereafter was invited to join Magnum Photos. By 1955, he became a full-time member of Magnum and even served as its President from 1975–76. He has travelled all over the world and has produced several works of reportage on North Vietnam. The artist’s photographs appeared in several magazine publications, including Life, National Geographic, and Stern.