Quote of the Week by Manuel Alvarez Bravo 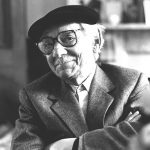 “A photographer’s main instrument is his eyes. Strange as it may seem, many photographers choose to use the eyes of another photographer, past or present, instead of their own. Those photographers are blind.” —Manuel Alvarez Bravo (1902-2002)

Manuel Alvarez Bravo was a Mexican photographer whose work is considered some of the most important photography in 20th-century Latin America. Bravo’s most acclaimed images are black-and-white depictions of nudes, folk art, and street scenes imbued with a surreal or supernatural presence. A noted portraitist, he also captured a series of compelling photographs of the Mexican artists Frida Kahlo and Diego Rivera. Born in Mexico City, Mexico, he studied art at the Academy of San Carlos but was mostly a self-taught photographer. He was later introduced to Edward Weston by the Italian artist Tina Modotti in Mexico City, who both encouraged Bravo to develop his practice. He went on to have over 150 solo exhibitions and 200 group exhibitions, including The Museum of Modern Art’s famed The Family of Man exhibition of 1955, curated by Edward Steichen. In 2001, the J. Paul Getty Museum in Los Angeles hosted a retrospective of Bravo’s work. His photographs can be found in the Art Institute of Chicago, the Metropolitan Museum of Art in New York, the Victoria & Albert Museum in London, and the Los Angeles County Museum of Art, among others.