Quote of the Week by Malick Sidibé 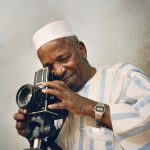 “Before I knew the camera, I knew about images. It’s all about trying to make light with a pencil or with a crayon. It really helped me in the beginning, because I understood how light and shadow were working on an image.” —Malick Sidibé (1935—2016)

Malick Sidibé was a celebrated Malian photographer. Working primarily in black and white, his photographs captured lively portraits and scenes of celebration. His best-known works depict the burgeoning pop culture and nightlife of the Malian capital, prolifically documenting young people and their dress in elegantly posed studio portraits with patterned backdrops, which either match or deliberately clash with the sitters’ outfits and poses. Noted for his artistic talent at an early age, Sidibé was selected to attend the School of Sudanese Craftsmen and later worked as an apprentice at the Gérard Guillat-Guignard’s Photo Service Boutique, developing his skill and interest in the photographic medium. Gradually, he began to garner international acclaim, with solo exhibitions dedicated to his work at the Museum of Contemporary Art in Chicago, the Stedelijk Museum in Amsterdam, and the Musée Pincé in Angers, among others. He was the recipient of the Golden Lion Award for Lifetime Achievement at the 2007 Venice Biennale, one the art world’s highest honours.