Quote of the Week by Lisette Model 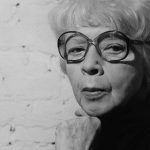 “New images surround us everywhere. They are invisible only because of sterile routine convention and fear. To find these images is to dare to see, to be aware of what there is and how it is. The photographer not only gets information, he gives information about life.” —Lisette Model (1901-1983)

Lisette Model was an Austrian-born American photographer whose work portrayed city life. By getting up close to her human subjects, Model conveyed the sense of a chance event. She moved to Paris in 1924 where she met the Russian painter Evsa Model, whom she married. By 1933, Model had given up music to pursue visual art, attending the painting courses of André Lhote, and basic instructions on photography from her younger sister Olga. After emigrating to New York with her husband in 1937, Model began working as a photographer for Harper’s Bazaar, whose editor at the time was the esteemed Alexey Brodovitch. Along with her own career, Model also taught photographer, some of her students included Diane Arbus and Larry Fink. Today, her works are held in the collections of the Art Institute of Chicago, The Museum of Modern Art in New York, and the National Gallery of Art in Washington, D.C., among others.