Quote of the Week by John Szarkowski 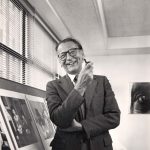 “Photography is a system of visual editing. At bottom, it is a matter of surrounding with a frame a portion of one’s cone of vision, while standing in the right place at the right time. Like chess, or writing, it is a matter of choosing from among given possibilities, but in the case of photography the number of possibilities is not finite but infinite.” —John Szarkowski (1925-2007)

John Szarkowski was an American photographer and curator best known for his role as the director of the Museum of Modern Art’s Photography Department from 1962 through 1991. He received a degree in art history from the University of Wisconsin, Madison in 1948. After working as a museum photographer at the Walker Art Center in Minneapolis, he moved to Buffalo to teach photography. Szarkowski then relocated to Chicago, where he worked on his photobook The Idea of Louis Sullivan (1956). After his appointment at MoMA in 1962, he helped to launch the careers of Diane Arbus, Lee Friedlander, and William Eggleston, among several others during his tenure. He also published acclaimed books on the history of photography, including The Photographer’s Eye (1966) and Looking at Photographs: 100 Pictures from the Collection of The Museum of Modern Art (1973). After retiring from the museum in 1991, Szarkowski resumed his own career in photography. Today, his works are held in the collections of the Art Institute of Chicago, the Metropolitan Museum of Art in New York, and the Museum of Fine Arts in Boston, among others.