Quote of the Week by Joel-Peter Witkin 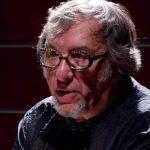 I think that what makes a photograph so powerful is the fact that, as opposed to other forms, like video or motion pictures, it is about stillness. I think the reason a person becomes a photographer is because they want to take it all and compress it into one particular stillness. When you really want to say something to someone, you grab them, you hold them, you embrace them. That’s what happens in this still form. — Joel-Peter Witkin (1939)

Joel-Peter Witkin is an American artist whose constructed photographs depict macabre often grotesque scenes. At an early age, he witnessed an automobile accident in front of his house which triggered his fascination with death at an early age. Working in the vein of the earlier photographers Henry Peach Robinson and Oscar Gustave Rejlander, Witkin carefully builds scenes with cadavers, hermaphrodites, and dwarfs which introduce literary, religious, and art-historical allusions. His works can be found in the collections of The Museum of Modern Art in New York, the J. Paul Getty Museum in Los Angeles, the National Gallery in Washington, D.C., the Victoria and Albert Museum in London, and the Centre Georges Pompidou in Paris.