Quote of the Week by Joan Fontcuberta 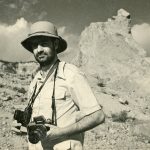 “Every photograph is a fiction with pretensions to truth. Despite everything that we have been inculcated, all that we believe, photography always lies; it lies instinctively, lies because its nature does not allow it to do anything else.” —Joan Fontcuberta (1955)

In his practice, Joan Fontcuberta challenges the authority of his medium to examine the subjectivity of truth and perception. His work questions the dogma of media, technology, religion, medicine, government, academia, the art world, and science, such as in Fauna Secret, where he created an archive of realistic documents describing fictitious plants and animals—like winged monkeys with unicorn horns—which he exhibited as a genuine scientific catalogue. Fontcuberta also creates photomosaics, compiled with images conjured from Google search, in order to explore the anonymous discourse of the Internet. His work has been shown internationally, including exhibitions at the Hasselblad Foundation in Gothenburg (2013) and La Maison Européenne de la Photographie in Paris (2014). He won the prestigious Hasselblad Award in 2013. His series are also held in museum collections throughout the world, including the Metropolitan Museum of Art in New York, Musée National d’Art Moderne/Centre Georges Pompidou in Paris, and the Museu d’Art Contemporani de Barcelona.