Quote of the Week by Jerry Uelsmann 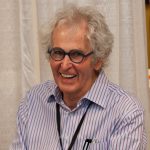 “One of the major changes in attitude that occurred in the world of art as we moved from the nineteenth into the twentieth century was that the twentieth century artist became more involved with personal expression than with celebrating exclusively the values of the society or the church. Along with this change came a broader acceptance of the belief that the artist can invent a reality that is more meaningful than the one that is literally given to the eye. I subscribe enthusiastically to this.” — Jerry Uelsmann (1934)

Jerry Uelsmann is an American photographer best known for his innovative work with the photomontage technique. Through his practice, Uelsmann creates allegorical and surreal compositions through painstaking handmade collage. His photographs are made using only analogue tools—much like the earlier photographer Oscar Gustave Rejlander, Uelsmann relies on multiple exposures and uses many enlargers to achieve his dream-like imagery. He studied for his BFA at the Rochester Institute of Technology and received his MFA from the University of Indiana. Uelsmann had his first solo show in 1967 at The Museum of Modern Art in New York, which launched his professional career. Today, his works are in the collections of the Art Institute of Chicago, the Victoria and Albert Museum in London, the Museum of Fine Arts in Boston, and The Metropolitan Museum of Art in New York, among others.