Quote of the Week by Inge Morath 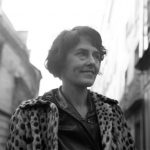 “Pressing the shutter has remained a moment of joyful recognition, comparable to the delight of a child balancing on tiptoe and suddenly, with a small cry of delight, stretching out a hand toward a desired object.” —Inge Morath (1923-2002)

Inge Morath was born in Graz, and educated in France and Germany. She studied languages at the Universities of Berlin and Bucharest, and worked as an editorial translator and interpreter for the U.S. Information Service Publications in Salzburg, and then as a radio writer and as literary editor for Vienna’s Der Optimist magazine. In 1952, she apprenticed in London to Simon Guttmann, a major figure in photojournalism and one of the founders of Berliner Illustrierte Zeitung. In 1954, Morath joined Magnum, the photo agency. She was assistant to Cartier-Bresson in 1953-54. More than a dozen books resulted from her travels in the following thirty years, including Fiesta in Pamplona (1954), Tunisia (1961), In Russia (1969), and Chinese Encounters (1979). Her warm and intimate portraits were also reproduced in such magazines as LIFE, Paris-Match, Saturday Evening Post, and Holiday. She moved to the United States in 1962, and married the playwright Arthur Miller. Two monographs on her work, Inge Morath (1975) and Portraits by Inge Morath (1986) have been also published.