Quote of the Week by Ilse Bing 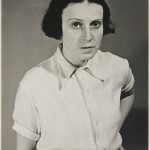 Ilse Bing was a leading photojournalist and commercial photographer during the pre- and inter-War period in Paris. In the 1920s, while studying art history and mathematics at the universities in Frankfurt and Vienna, Bing purchased a Leica camera and immediately became intrigued with the world of photography. She rapidly became involved in the field, and got commissioned work for magazines such as Das Illustriete Blatt, Vogue, and Harper’s Bazaar. Her unique photographic work has earned her the title “Queen of the Leica” from her well-known artist peers. In 1936, Ilse Bing was given a solo exhibition at the June Rhodes Gallery in New York, where she stayed for three months. In 1959, she abandoned photography completely, but continued to create drawings and collages, and write poetry. In 1976, she was rediscovered as a photographer by The Museum of Modern Art in New York. Her work was later included in exhibitions at the Art Institute of Chicago, the New Orleans Museum of Art, the Kunstverein in Frankfurt, and the Musée Carnavalet in Paris.