Quote of the Week by Henri Cartier-Bresson 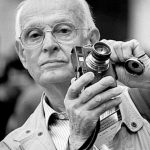 “To photograph is to hold one’s breath, when all faculties converge to capture fleeting reality. It’s at that precise moment that mastering an image becomes a great physical and intellectual joy.” —Henri Cartier-Bresson

Henri Cartier-Bresson is known as a pioneer of street photography. His dramatic black and white works are among the most iconic images of the 20th century. The artist is perhaps best known for his 1952 book The Decisive Moment, originally titled Images à la Sauvette (Images on the Run), the book explored his notion of photography as a candid medium. n 1947, the artist helped found the cooperative agency Magnum Photos with Robert Capa, David Seymour, George Rodger, and William Vandiver. Cartier-Bresson went on to receive the Grand Prix National de la Photographie in 1981 and the Hasselblad Award the following year. His works are held in the collections of The Museum of Modern Art in New York, the Tel Aviv Museum of Art, the National Gallery of Canada in Ottawa, and the Los Angeles County Museum of Art, among others.