Quote of the Week by Helen Levitt 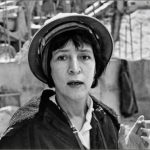 Helen Levitt was an American photographer best known for her iconic New York street photography. While growing up, she left high school to work for a commercial photographer, where she learned how to process film. Inspired by earlier masters such as Walker Evans and Henri Cartier-Bresson, she took her 35-millimetre camera to the streets, intimately capturing the daily activities of women, children, and minority communities. Levitt’s talent for the medium proved to be extraordinary. In 1939, her works were included in the inaugural exhibition of The Museum of Modern Art’s photography department. Later, she went on to receive two consecutive Guggenheim Fellowships in 1959 and 1960, and today, her work can be found in the collections of the Art Institute of Chicago, The Museum of Modern Art in New York, the National Gallery of Art in Washington, D.C., the Los Angeles County Museum of Art, and the Philadelphia Museum of Art, among others.