Quote of the Week by Harry Callahan 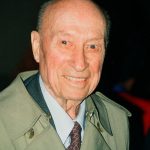 “I photograph continuously, often without a good idea or strong feelings. During this time the photos are nearly all poor but I believe they develop my seeing and help later on in other photos. I do believe strongly in photography and hope by following it intuitively that when the photographs are looked at they will touch the spirit in people.” —Harry Callahan (1912-1999)

Harry Callahan was a pioneering American photographer who worked in both colour and black-and-white. Among his best-known works are the numerous portraits of his wife Eleanor, who served as a constant model throughout his career. Born on October 22, 1912 in Detroit, MI, Callahan taught at the Institute of Design in Chicago, and went on to found the renowned photography department at the Rhode Island School of Design in Providence in 1961. During this time period, he served as an influential teacher to many important young American photographers. Callahan accumulated many honours during his life, including being featured in Edward Steichen’s landmark “The Family of Man” exhibition in 1955, and was awarded the National Medal of Arts in 1996. Today, Callahan’s works are held in the collections of The Museum of Modern Art in New York, the Smithsonian American Art Museum in Washington, D.C., and the Art Institute of Chicago, among others.