Quote of the Week by Gordon Parks 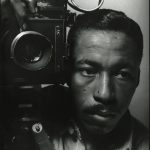 “I picked up a camera because it was my choice of weapons against what I hated most about the universe: racism, intolerance, poverty. I could have just as easily picked up a knife or a gun, like many of my childhood friends did… most of whom were murdered or put in prison… but I chose not to go that way. I felt that I could somehow subdue these evils by doing something beautiful that people recognise me by, and thus make a whole different life for myself, which has proved to be so.” —Gordon Parks (1912-2006)

Gordon Parks was a self-taught photographer, writer, composer, and filmmaker. Parks is remembered as the first African American photographer who worked for Vogue and Life magazines, best known for his documentary photojournalism of the 1940s through 1970s. He notably captured iconic images of the civil rights movement, investigating important turning points in inner cities. He was born into a farming family and grew up experiencing segregation and racist violence firsthand. He bought his first camera at the age of 25 at a Seattle pawnshop, and in 1940 moved to Chicago where he developed a portrait business. In 1948, his photographic essay on a Harlem gang leader earned Parks a job as a photographer for Life, where he continued to work until 1972. In addition to his work as a photographer, Parks also became a successful filmmaker, directing Shaft, one of the most successful movies of 1971, and writer, authoring the book A Choice of Weapons (1966) that chronicled his journey as a photographer. His awards include the American Society of Magazine Photographers’ Photographer of the Year in 1960, the Congress of Racial Equality Lifetime Achievement Award in 2000, as well as over 20 honorary doctorates.