Quote of the Week by Gilles Peress 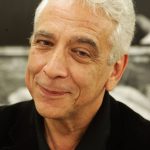 Gilles Peress’s photography demonstrates his uncommon ability to navigate and communicate the atmosphere and urgency of volatile political environments. He made his first photographic series in 1970 after attending the Institut d’Études Politiques (1966-68) and the Université de Vincennes (1968-71). By 1971, he had established himself as a freelance photographer, publishing work in Du, the London Sunday Times, The New York Times, Photo, among others. In 1972 he joined Magnum, where he has served twice as the organisation’s president. He has received multiple honours such as the W. Eugene Smith Award, the Ernst Haas Award, a Guggenheim Fellowship, and ICP’s Infinity Awards for Journalism. Peress is the Professor of Human Rights and Photography at Bard College, NY and Senior Research Fellow at the Human Rights Center, UC Berkeley.