Quote of the Week by Germaine Krull 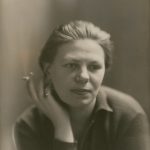 Germaine Krull was a German photographer best known for her documentary photography which explored controversial issues, including gender, social inequality, and political ideology. Considered among the most important photographers of the early-20th century, Krull experimented with a variety of techniques including double exposure, photomontage, and shooting from extreme angles. Among her most well-known photographs is her portrait of Walter Benjamin, in which she captured the famous philosopher mid-thought. Born n Posen, Germany (now Poznan, Poland), Krull studied at the Lehr-und Versuchsanstalt für Photographie in Munich, Germany. After completing her studies, she opened a photography studio in Munich and befriended prominent intellectuals Rainer Maria Rilke and Friedrich Pollock. In 1921, she was exiled from Germany for her involvement with the Communist Party of Germany and spent much of her time working in Europe, Asia, and Africa. Krull died on July 31, 1985 in Wetzlar, Germany. Her works are held in the collections of The Museum of Modern Art in New York, the J. Paul Getty Museum in Los Angeles, and the Metropolitan Museum in New York, among others.