Quote of the Week by Eliot Porter 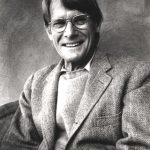 “Every photograph that is made whether by one who considers himself a professional, or by the tourist who points his snapshot camera and pushes a button, is a response to the exterior world, to something perceived outside himself by the person who operates the camera.” —Eliot Porter (1901-1990)

Eliot Porter was an American photographer known for his richly coloured images of the natural world.  His interest in nature was fostered by his family from a young age. He began photographing his family’s island property as a youth in Maine, before going on to study chemical engineering at Harvard University. After graduating in the mid-1930s, his brother the painter and art critic Fairfield Porter, encouraged his latent interest in photography and arranged introductions for him with both Ansel Adams and Alfred Stieglitz. In the early 1940s, after having committed to pursue a career in photography, he began the transition from traditional black and white film to the new Kodachrome colour film used by magazine photographers. Throughout the following decades, he published a number of critically acclaimed photography books, including In Wildness Is the Preservation of the World (1962), capturing the disappearing wilderness of America as well as the Galápagos Islands, Antarctica, and East Africa. Today, his works are held in the collections of The Museum of Modern Art in New York, the Art Institute of Chicago, the Los Angeles County Museum of Art, and the Philadelphia Museum of Art.