Quote of the Week by Don McCullin 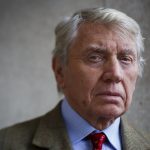 “Photography’s a case of keeping all the pores of the skin open, as well as the eyes. A lot of photographers today think that by putting on the uniform, the fishing vest, and all the Nikons, that that makes them a photographer. But it doesn’t. It’s not just seeing. It’s feeling.” —Don McCullin (1935)

Don McCullin is widely recognised as one of the world’s greatest living war photographers, best known for capturing powerful images on the battlefield. Born in London, England on October 9, 1935, he first developed an interest in photography when he served in the British Royal Armed Forces as an assistant to an aerial photographer. Having left school at 15, his time in the National Service was the only formal photography training he ever had. In 1959, the British newspaper The Observer published his image of a local London gang, thereby kick-starting his photojournalism career. After several years of freelancing, he became a staff photographer for the Sunday Times in 1966. During his decades-long career, he has covered wars in Cyprus, the Congo, Vietnam, Bangladesh, and the Middle East for which he has won several awards including two from the prestigious World Press Photo organization. McCullin has also penned over a dozen books, including his acclaimed autobiography, Unreasonable Behavior. Currently, McCullin is concentrating on landscape photography and still-life works.