Quote of the Week by Brassaï 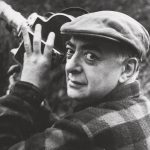 “My images were surreal simply in the sense that my vision brought out the fantastic dimension of reality. My only aim was to express reality, for there is nothing more surreal than reality itself. If reality fails to fill us with wonder, it is because we have fallen into the habit of seeing it as ordinary.” —Brassaï (1899-1984)

Brassaï was a Hungarian-born French photographer, credited with creating countless iconic images of 1920s Parisian life. He moved to the city in 1924, where he worked as a journalist and joined a circle of Hungarian artists and writers. After dark, he wandered his neighbourhood of Montparnasse and documented sex workers, street cleaners, and other such professions. Though Brassaï is famous for capturing the grittier aspects of the city, he also documented high society, including the ballet, opera, and intellectuals—among them his friends and contemporaries, Pablo Picasso, Salvador Dalí, Alberto Giacometti, and Henri Matisse. At the same time, he became interested in graffiti, seeing it as a form of outsider art that could open the door for new artistic expression. He continued to support himself with commercial photography throughout his life.