Quote of the Week by Bill Cunningham 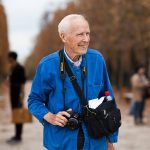 “I go out every day. When I get depressed at the office, I go out, and as soon as I’m on the street and see people, I feel better. But I never go out with a preconceived idea. I let the street speak to me.” — Bill Cunningham (1929–2016)

Bill Cunningham was a legendary fashion photographer. For nearly 40 years, he documented countless styles that emerged on the avenues of New York City, which appeared in the spreads of The New York Times. He was awarded the Legion of Honor by the French government in 2008, while in 2009, New York Landmarks Conservancy declared him a living landmark. In 2010, a documentary titled Bill Cunningham New York was made to commemorate his life’s work. Bill, who preferred to remain obscure and stayed away from the glitz and glamour associated with the fashion industry, was also never someone who sought fame and recognition for his work. He was always observing, and one would almost always find him on his bicycle, riding through the streets, on the lookout for any peculiar fashion trend. At the time of his death, he left behind the manuscript of an autobiography which he titled Fashion Climbing, which was published posthumously in 2018.  Later, the Bill Cunningham Foundation was established to promote and support his photographs and legacy.