Quote of the Week by Barbara Morgan 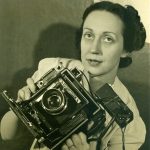 “Photography is a living art in which people, places, emotions, thoughts, and acts of today’s world are interwoven… I want to make it clear that the foremost resource is the photographer himself. It is his authentic response to life and his urge to embody it in a superb photographic form that is the active root of our aesthetics.” —Barbara Morgan (1900-1992)

Barbara Morgan was an American photographer who captured images of professional dancers during their performances. Interested in the visual power of gesture, Morgan froze these ephemeral moments to heighten their symbolic significance. She moved with her family to Southern California as a child. Morgan went on study painting at the University of California, Los Angeles before moving to New York in 1930. In the city, she was exposed to the photography of Edward Weston and the dance performances of Martha Graham. These two new interests mingled to lead Morgan towards her photography project documenting at least 40 established dancers and choreographers, including Merce Cunningham. She also spent time travelling the Southwest, where she documented Navajo and Pueblo Indians dance rituals with watercolours, prints, and photographs. Today, her works are held in the collections of the National Portrait Gallery in Washington, D.C., The Museum of Modern Art in New York, and the National Gallery of Canada in Ottawa, among others.