Quote of the Week by August Sander 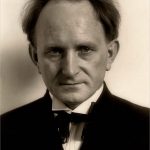 “Nothing seemed to me more appropriate than to project an image of our time with absolute fidelity to nature by means of photography… Let me speak the truth in all honesty about our age and the people of our age.“ —August Sander (1876–1964)

August Sander was a German photographer whose work documented the society he lived in. Lauded as one of the most important portrait photographers of the early 20th century, Sander focused his gaze on bricklayers, farmers, bakers, and other members of the community. By the time the Nazi regime rose to power in the 1930s, Sander was considered an authority on photography and recognized for his book Face of Our Time (1929). During this era, he faced both personal persecution and the systematic destruction of his work. Following the death of his son in 1944, and the destruction of his work in 1946, Sander practically ceased photography altogether. Today, the artist’s works are held in the collections of The Museum of Modern Art in New York, the National Gallery of Art in Washington, D.C., and the Wallraf-Richartz Museum in Cologne, among others.