Quote of the Week by Ara Güler 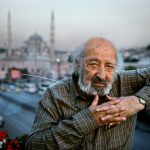 “Photography has a huge impact. But no one looks at photographs either. Those not looking at the life itself what can they see in a photograph? I do not take photographs for people to look and be impressed. I photograph what I see. Some see. Some don’t.” —Ara Güler (1928-2018)

Ara Güler began his career in his school days as a teenager, by working as a photographer for the Turkish newspaper, Yeni, and became internationally recognised when the US magazine Time-Life opened its branch in Turkey. Güler caught the attention of Marc Riboud and Henri Cartier-Bresson, and finally joined Magnum but resigned later. Nicknamed as “the Eye of Istanbul,” Güler claimed he was much more and liked to refer to himself as “the Photographer of Istanbul.” Güler was acknowledged in the British 1961 Photography Yearbook and was accepted as the only Turkish member of the American Society of Magazine Photographers (ASMP). His work was used to illustrate several books, and his photographs saw the daylight of numerous exhibitions throughout his lifetime. During his lifetime, the photojournalist interviewed influencing personalities such as Winston Churchill, Indira Gandhi, Ansel Adams, Pablo Picasso, and more.