Quote of the Week by Anja Niedringhau 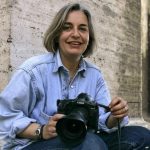 “Things develop in front of my camera, and then I will try to do the best out of it. I am close, but in most of the scenes, I am trying not to be seen. I think that’s the trick. I think it starts in your heart, goes to the head, and the head puts it into the finger.” —Anja Niedringhaus (1965-2014)

Anja Niedringhaus started her career as a freelance photographer for a local newspaper in her hometown in Germany at the age of 16. After finishing high school, she moved on to study German literature, philosophy, and journalism in Göttingen. Niedringhaus continued her freelance work as a photographer for various newspapers, until joining the European Press Photo Agency as a staff photographer, in Frankfurt in 1990. Until 2001, she worked mainly covering conflicts in the former Yugoslavia and in that year was a tutor at the World Press Photo workshop in Sarajevo. In 2002, she joined the Associated Press as a staff photographer and has since then been based in Geneva, Switzerland. Since 2002, Niedringhaus has spent most of her time covering wars and political events in Israel, Palestine, Iraq, Afghanistan, and Pakistan. In addition to crises and wars, she also photographs sporting events and has covered eight Olympic Games. From 2006 to 2007, Niedringhaus was a Nieman Fellow for Journalism at Harvard University in the US. She has received numerous awards for her work, including the Pulitzer Prize in the breaking news category, with a team of AP photographers for their coverage of the war in Iraq, and the Courage in Journalism Award from the International Women’s Media Foundation, both in 2005. Her work has been exhibited at the Museum of Modern Art in Frankfurt, Germany, at the C/0 gallery in Berlin, and in museums in London and Canada.