Quote of the Week by Andreas Gursky 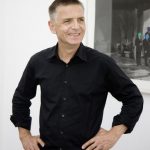 “In retrospect, I can see that my desire to create abstractions has become more and more radical. Art should not be delivering a report on reality, but should be looking at what’s behind something.” —Andreas Gursky (1955)

Andreas Gursky is a German artist known for his large-scale digitally manipulated images. Similar in scope to early 19th-century landscape paintings, Gursky’s photographs capture built and natural environments on a grand scale. The dizzying repetition of elements creates a surreal monumentality, as seen in his 99 Cent (1999).  In 2011, his photograph Rhein II sold for 4.3 million dollars, making it the most expensive photograph ever sold. Today, Gursky’s works are in the permanent collections of the Metropolitan Museum of Art in New York, the San Francisco Museum of Modern Art, and the Tate Modern in London.