Quote of the Week by André Kertész 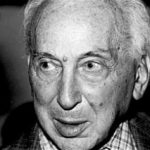 “I am an amateur and intend to remain one my whole life long. I attribute to photography the task of recording the real nature of things, their interior, their life. The photographer’s art is a continuous discovery which requires patience and time. A photograph draws its beauty from the truth with which it’s marked. For this very reason, I refuse all the tricks of the trade and professional virtuosity which could make me betray my career. As soon as I find a subject which interests me, I leave it to the lens to record it truthfully. Look at the reporters and at the amateur photographer! They both have only one goal; to record a memory or a document. And that is pure photography.” —André Kert ész (1894–1985)

André Kertész was a Hungarian photographer who emerged as one of the most influential practitioners of the medium. His remains best known for his contributions to photojournalism, employing distinctively dynamic compositions throughout his influential photo essays. He notably maintained a palpable empathy for his subjects, setting aside political or social biases regardless of who he was photographing. Born Kertész Andor on July 2, 1894 in Budapest, Austria-Hungary, he came from a Jewish middle-class background. Though his family expected him to pursue a career in business, he eventually moved to Paris and fell with its bohemian culture. Throughout the mid-1920s, he met Piet Mondrian, Sergei Eisenstein, and many of the Dadaists. Kertész eventually fled France and its growing Jewish persecutions, and emigrated to the United States where he went on to work for magazines such as Vogue, Harper’s Bazaar, and House & Garden, as well as mounting solo shows at the Art Institute of Chicago in 1946 and at The Museum of Modern Art in New York in 1964.