Quote of the Week by Anders Petersen 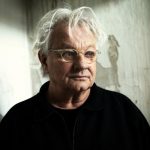 “There is not a big difference between life and taking pictures… You’re in the middle of life, you’re living, making love, eating, sleeping—and photography is part of it. And I don’t say this because I’m being romantic. I say this because that’s just the way it happens to be.” —Anders Petersen (1944)

Born in Stockholm, Sweden, Anders Petersen is best knowns for his stark black and whites and his intimate photos shot from up close. In 1967 he started photographing a bar called Café Lehmitz in Hamburg, close to Zeughausmarkt. He was photographing there for a period of almost three years. Peterson describes his seminal work as a story of prostitutes, transvestites, lovers and addicts as ‘private documentation’. In 1984, the first book in a trilogy about locked institutions was published. The three books were about people in a prison, a nursing house, and a psychiatric hospital. After photographing the hospital for three years, he oriented himself towards a more free approach in a kind of diary-like photography. During 2003 and 2004, he was appointed Professor of Photography in the School of Photography and Film at the University of Göteborg, Sweden. Some of his accolades include Photographer of the Year by the International Photofestival in Arles. Dr. Erich Salomon Award by Deutsche Gesellschaft für Photographie, Germany, and PhotoBook of the Year award.