Quote of the Week by Alvin Langdon Coburn 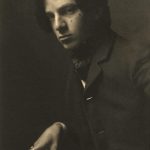 “Photography makes one conscious of beauty everywhere, even in the simplest things, even in what is often considered commonplace or ugly. Yet nothing is really ‘ordinary’, for every fragment of the world is crowned with wonder and mystery, and a great and surprising beauty.” —Alvin Langdon Coburn (1882-1966)

Alvin Langdon Coburn’s work traces photography’s transition from Pictorialism to modernism at the turn of the century. Born in Boston, he was given his first camera at the age of eight, but did not photograph seriously until he met F. Holland Day in 1898. Day encouraged Coburn to pursue photography and asked his help in preparing the exhibition The New School of American Pictorial Photography at London’s Royal Photographic Society in 1900. Coburn’s affiliation with avant-garde photography also helped him to gain access to the Linked Ring Brotherhood, an association of Pictorialist photographers, in 1903. Eventually, he moved to London where his close association with the Vorticists Wyndham Lewis and Ezra Pound inspired experiments that led to his construction of the Vortoscope in 1916. This device, consisting of a kaleidoscopic arrangement of mirrors, allowed him to produce what many considered the first entirely abstract photographs.