Quote of the Week by Alexander Rodchenko 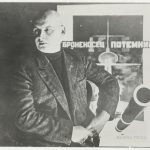 “One has to take several different shots of a subject, from different points of view and in different situations, as if one examined it in the round rather than looked through the same keyhole again and again.” —Alexander Rodchenko (1891-1956)

Alexander Rodchenko was a founding member of Russian Constructivism—the avant-garde movement characterized by unembellished abstraction—along with Vladimir Tatlin. He was known for his politically motivated photography, posters, paintings, and sculpture. Born in St. Petersburg, Russia, he studied drawing and painting at the Kazan School of Fine Arts and architecture at the Stroganov School of Applied Art. An early influence came from Kazimir Malevich, whose Suprematist style contributed to Rodchenko’s adoption of an austere aesthetic and use of materials. In the late 1920s, he joined the October group, with members Diego Rivera, Gustav Klutsis, and Sergei Eisenstein, furthering his commitment to creating art for the working classes. Today, his works are held in the collections of The Museum of Modern Art in New York, the Museum Ludwig in Cologne, and the Art Institute of Chicago, among others.