Quote of the Week by Abbas 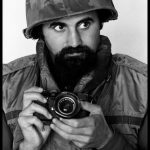 “My photography is a reflection, which comes to life in action and leads to meditation. Spontaneity – the suspended moment – intervenes during action, in the viewfinder” —Abbas (1944-2018)

Abbas dedicated himself to documenting the political and social life of societies in conflict. In a career that spanned six decades, he covered wars and revolutions in Biafra, Bangladesh, Northern Ireland, Vietnam, the Middle East, Chile, Cuba, and South Africa during apartheid. He also documented life in Mexico over several years, and pursued a lifelong interest in religion and its intersection with society. From 1978 to 1980, he photographed the revolution in Iran, to which he returned in 1997 after seventeen years of voluntary exile. His book Iran Diary 1971-2002 is a critical interpretation of Iranian history, photographed and written as a private journal. During his years of exile Abbas traveled constantly. Between 1983 and 1986 he journeyed through Mexico, attempting to photograph a country as a novelist might write about it. The resulting exhibition and book, Return to Mexico: Journeys Beyond the Mask, helped define his photographic aesthetic. A member of Sipa from 1971 to 1973, then of Gamma from 1974 to 1980, Abbas joined Magnum Photos in 1981 and became a member in 1985.