Quote of the Week by Aaron Siskind 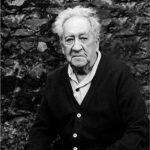 “Photography is a way of feeling, of touching, of loving. What you have caught on film is captured forever…. it remembers little things, long after you have forgotten everything.” —Aaron Siskind (1903-1991)

Aaron Siskind was an American photographer and an influential professor who began making pictures after he received a camera as a wedding present. He photographed nature, people and architecture, and was considered to be closely involved with the abstract expressionist movement. He was also a founding member of the Society for Photographic Education. Amongst his entire body of work, his most successful projects include The Harlem Document (1937-1940), Seaweed (1947-1953), and The Pleasures and Terrors of Levitation (1953-1963).