Quote of the Wee by Eric Mencher 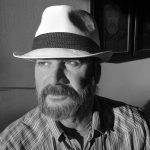 “When you’re out photographing, it all comes down to preparation. Not just in terms of what you’re shooting with, but also being aware of, to be inspired by, and to build on the greatest traditions of literature, painting, dance, music, photography and more.” —Eric Mencher

Until 2009, Eric Mencher worked as a photojournalist at The Philadelphia Inquirer, covering conflict assignments, including the post-apartheid era in South Africa, the aftermath of genocide in Rwanda, life under Fidel Castro in Cuba and the civil war in Chechnya. He also photographed numerous stories in the arts, including the 100th anniversary of James Joyce’s Ulysses,  and a series illustrating Cervantes’ masterpiece, Don Quixote. Mencher was the recipient of the 1997 Overseas Press Club Award for Rwanda: Aftermath of Genocide and has won prizes in World Press Photo, Pictures of the Year, Best of Photojournalism and National Headliners. His fellowships include a Penn State University Professional in Residence Fellowship; a Terra Fellowship from the Giverny Institute at the Museum of American Art, Giverny, France; and a Pew Fellowships in the Arts. He has also co-founded Hikari Creative, a mobile phone photography collective.