Panasonic introduces a new large-aperture ultra-wide fixed focal length lens, the LUMIX S 18mm f/1.8 (S-S18), as the fifth addition to the series of f/1.8 large-aperture lenses based on the L-Mount system standard. The new lens brings its total f/1.8 prime lens support for its S-series cameras to five optics
The new lens is constructed of 13 lens elements in 12 groups and includes three aspherical lenses, three ED (extra-low dispersion) lenses, one UED (ultra extra-low dispersion) element, and one UHR (ultra-high refractive index) lens.
The use of three aspherical lenses recognises both high descriptive performance and bokeh. The three ED lenses also suppress chromatic aberration. It is suitable for various situations including landscapes, astrophotography and architecture photography. It can also be used for close-up shots with the minimum focusing distance of 0.18m. 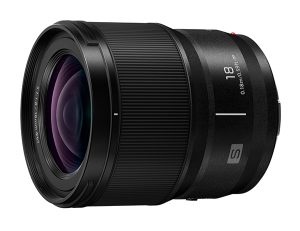 The lens is capable of smooth, silent operation to work with the camera’s contrast-based AF system with the sensor drive at max.240 fps. For the non-linear setting, focus is shifted with a variable amount according to the rotation speed of the focus ring while focus is shifted with a designated amount according to the rotational quantum of the focus ring for the linear setting. Sensitivity (the amount of focus shift per rotational quantum) can be selected from 90 to 360 degrees by 30 degrees to enable intended focus operation. The lens is approximately 12-ounces. It has a compact size and the rugged dust/splash-resistant2 design can withstand harsh conditions.