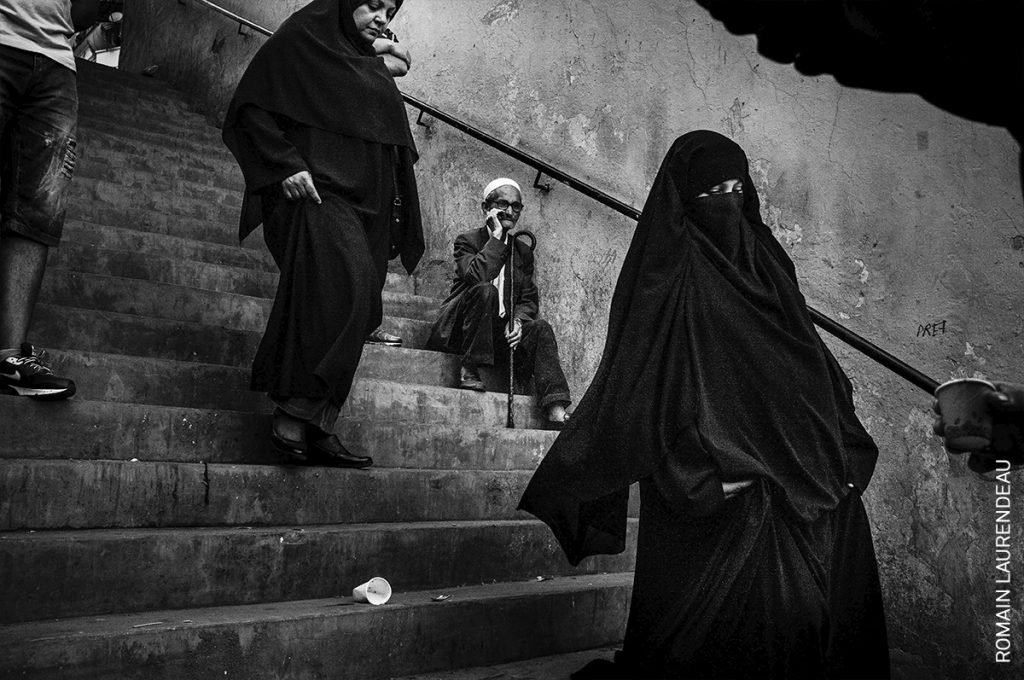 An old man sits on a staircase in Bab el-Oued, Algiers, Algeria, on 31 May 2014. Niqabs have become more popular in Bab el-Oued over the past 20 years. Photograph/Romain Laurendeau 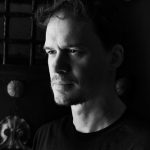 Romain Laurendeau trained in photography at ETPA in Toulouse, France and has worked on long term projects as a professional photographer in France, Senegal, Algeria and Palestinian territories and Israel. For more than five years, he worked on sharing stories of young people in Algiers, Algeria. The work documents many of the underlying reasons for the protests happening in Algeria. Image credit: Addlene Meddi

Kho, the Genesis of a Revolt: Young people make up more than half of Algeria’s population, and according to a UNESCO report 72% of people under 30 in Algeria are unemployed. Pivotal moments in Algerian history, such as the ‘Black October’ revolt of 1988, have had angry youth at their core. Black October was harshly suppressed—more than 500 people were killed in five days—and was followed by a ‘black decade’ of violence and unrest. Thirty years on, the effects of that decade are still present. In a traumatized country, high unemployment leads to boredom and frustration in everyday life and many young people feel disassociated from the state and its institutions. In neglected working-class neighbourhoods such as Bab el-Oued in Algiers, young people often seek refuge in diki—private places that are ‘bubbles of freedom’ away from the gaze of society and from conservative social values. But the sense of community and solidarity is often not enough to erase the trials of poor living conditions. In February 2019, thousands of young people from working-class neighbourhoods again took to the streets in what became a nationwide challenge to the reign of long-time president Abdelaziz Bouteflika.

Kho (the word means ‘brother’ in colloquial North-African Arabic) is about the genesis of a revolt. It is the story of the deep unease of youth, who, by daring to challenge authority, inspired the rest of the population to join their action, giving birth to the largest protest movement in Algeria in decades. 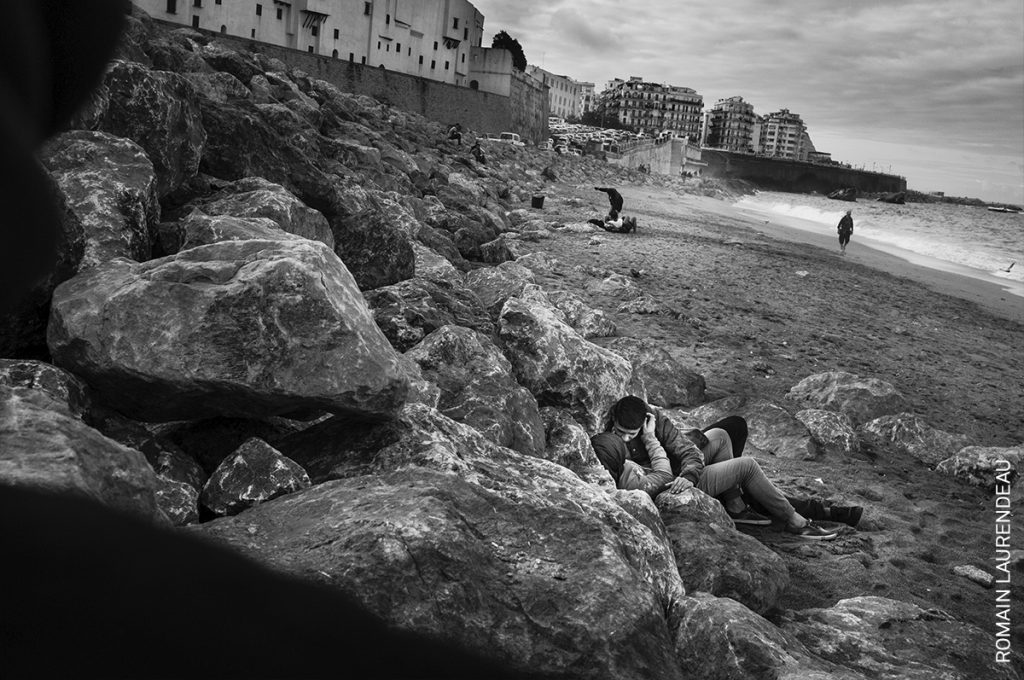 A young couple challenges a taboo as they kiss in a public space in Algiers, Algeria, on 8 December 2016. Photograph/Romain Laurendeau 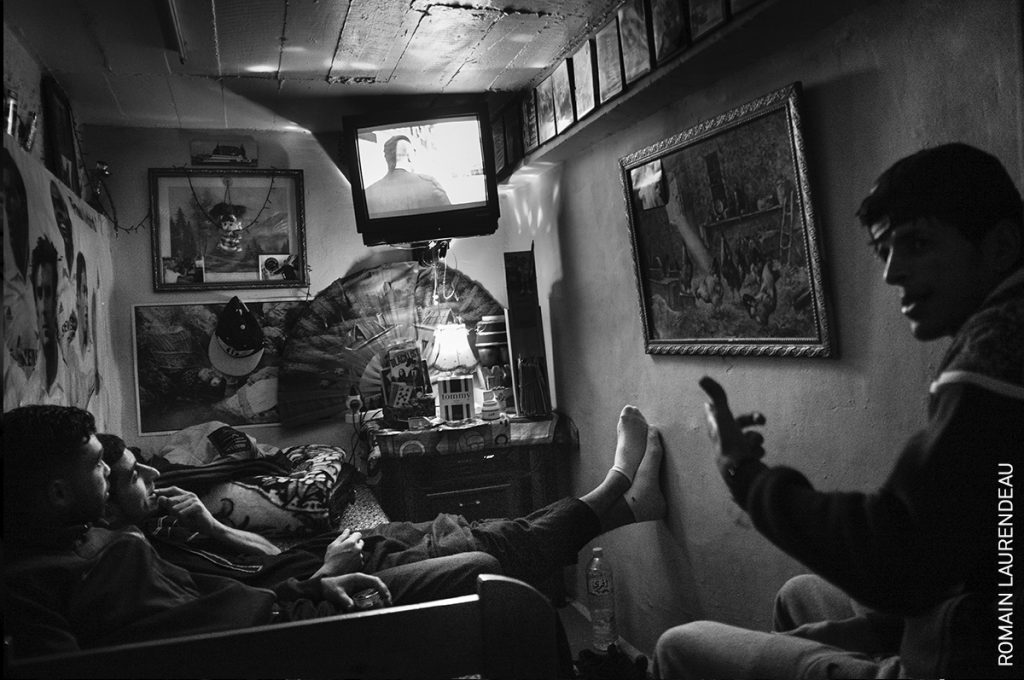 Friends relax and watch television in their diki, a private space they have created in a converted storeroom, in Bab el-Oued, Algiers, Algeria, on 6 December 2016. Photograph/Romain Laurendeau 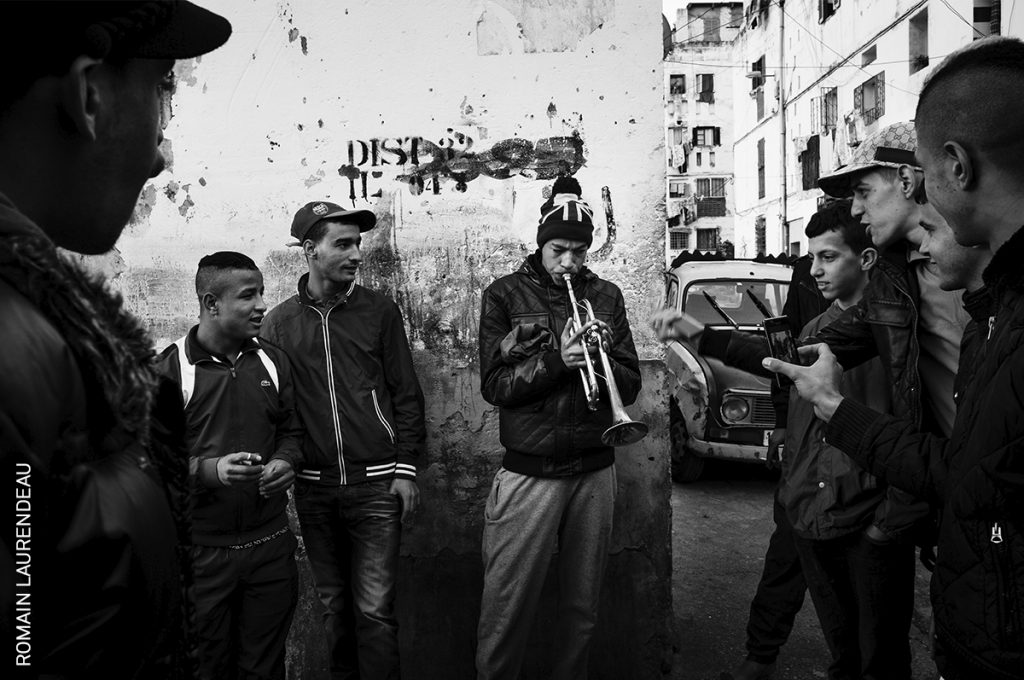 A young man gathers an audience as he experiments with a trumpet in the crowded ‘Climat de France’ quarter of Bab el-Oued, Algiers, Algeria, on 8 December 2014. Nobody knows how to play the instrument, but it generates widespread enthusiasm. Photograph/Romain Laurendeau 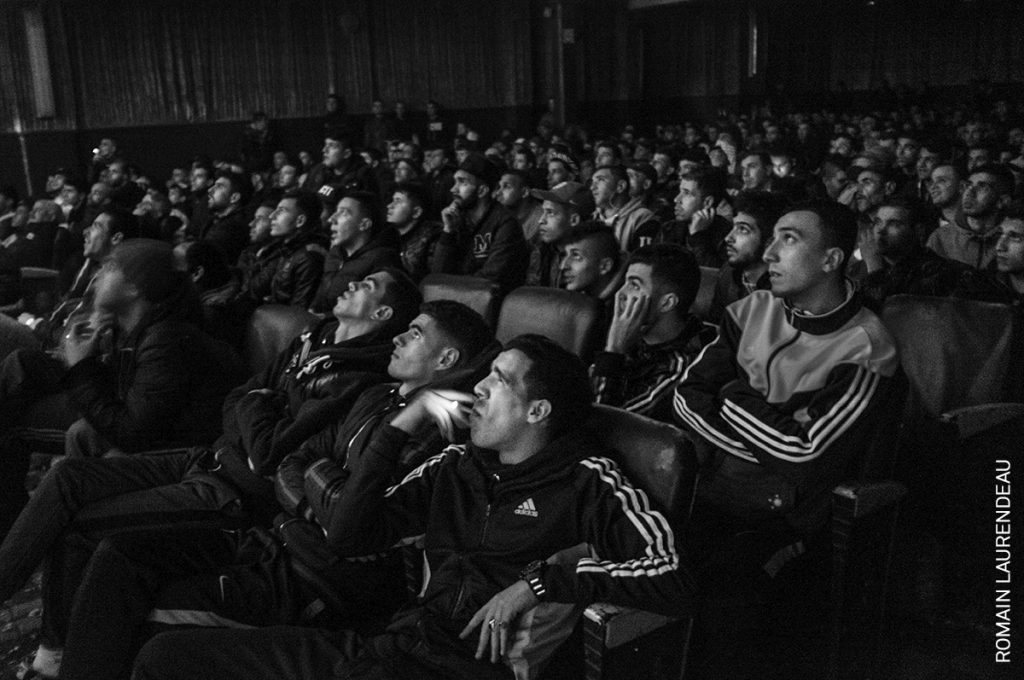 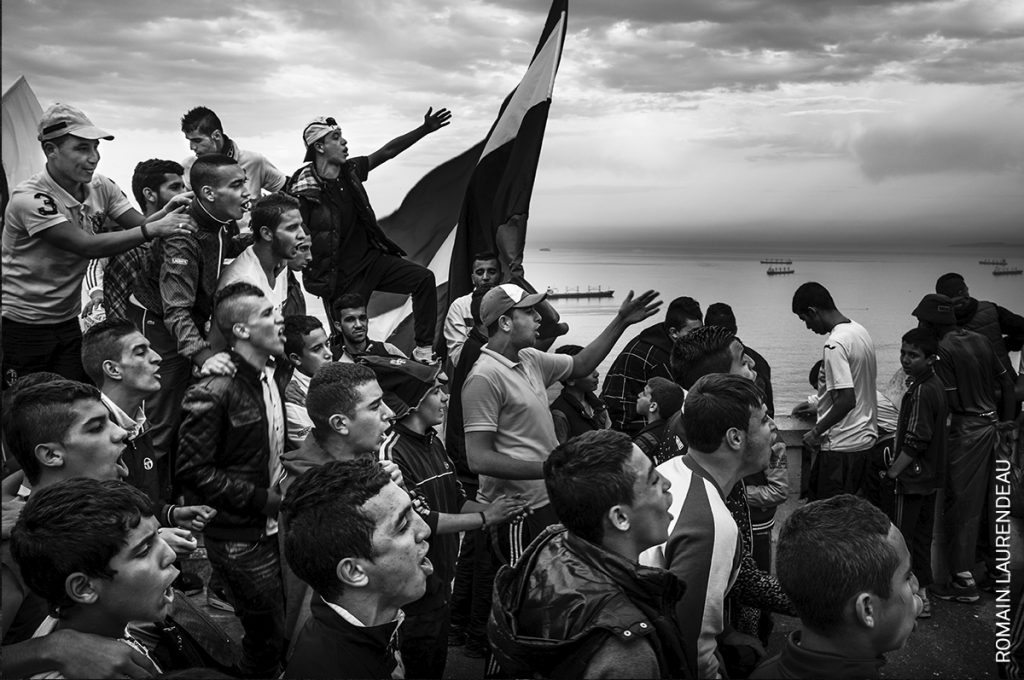 Football fans gather in the street and sing during a match that is taking place behind closed doors due to violence, in Algiers, Algeria, on 22 November 2014. Photograph/Romain Laurendeau 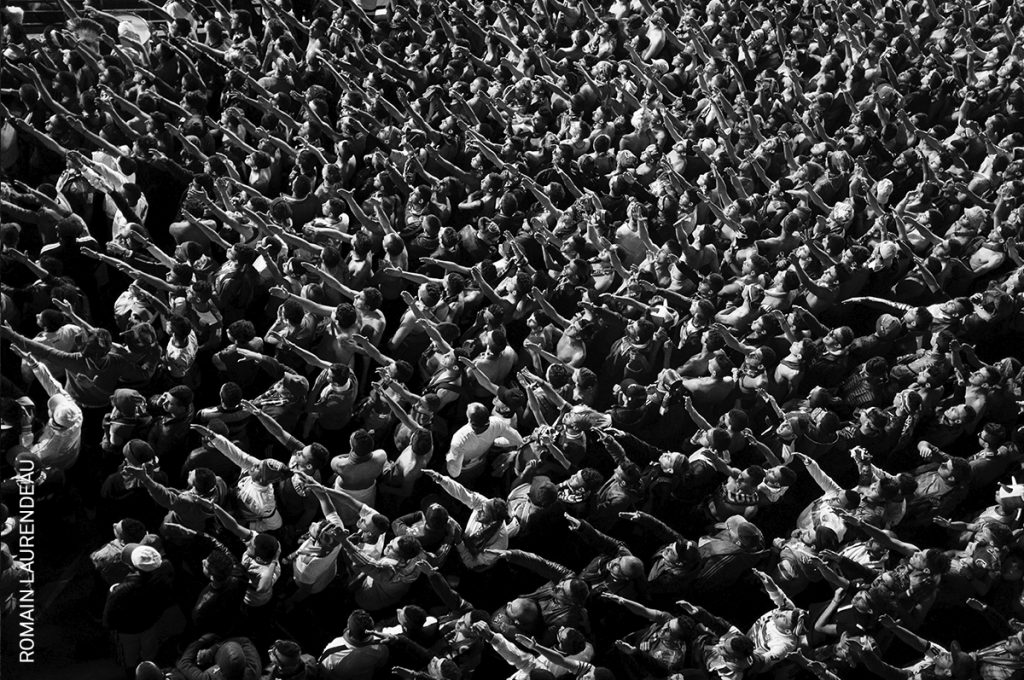 Ultra fans sing during a football match in the 5 July 1962 Stadium in Algiers, Algeria, on 22 December 2015. After street demonstrations were banned in 2001, football stadiums became places where youth could protest through song. Photograph/Romain Laurendeau 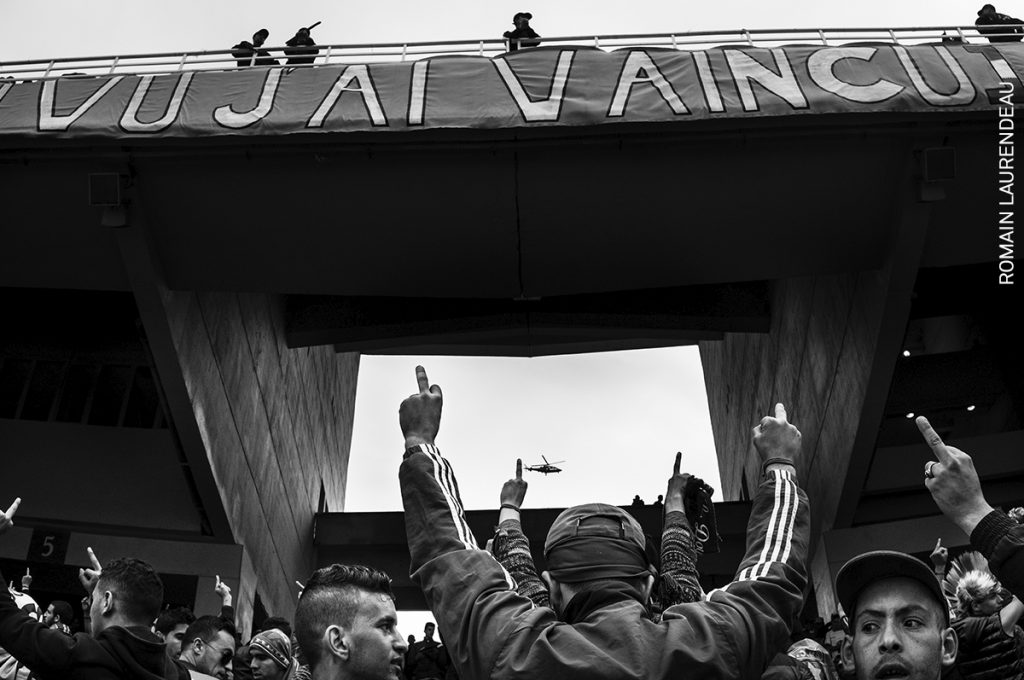 Ultras chant insults against the state, the president, generals and the police during the final of the Algerian Cup in Algiers, on 1 May 2016. Photograph/Romain Laurendeau