Canon has launched its first APS-C cameras in the EOS R mirrorless system, the EOS R7. Unveiled alongside are two new lenses—RF-S 18–45mm f/4.5-6.3 IS STM and the RF-S 18–150mm f/3.5-6.3 IS STM. The EOS R7 features a 32.5MP sensor, It also support the DIGIC X image processing engine. The EOS R7 is the first APS-C EOS camera to feature the sensor-shift type 5-axis In-Body IS (Image Stabiliser) mechanism, which can achieve up to 8-stops of equivalent image stabilisation. The EOS R7 also features Movie Digital IS, which conducts 5-axis image stabilisation for steadier videos even with a lens that does not have Optical Image Stabiliser (Optical IS). 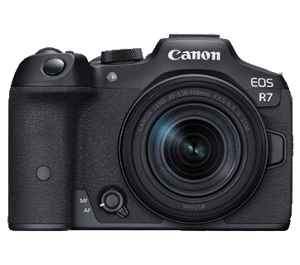 The EOS R7 can continuously shoot up to 15fps in mechanical and electronic first-curtain shutter modes (with AF/AE tracking). In electronic shutter mode, the EOS R7 is capable of burst shooting at approximately 30fps; another feature is the RAW burst mode, which shoots full-resolution RAW images up to 30fps. The mode supports pre-shooting, which starts recording the scene up to 0.5 seconds before the shutter is released.

For content creators, the EOS R7 can use 7K oversampling to record high-quality 4K UHD video at up to 30fps in the new 4K UHD Fine mode. Uncropped 4K 60fps recording is possible in 4K UHD Standard mode. It is also the first APS-C EOS photography camera to support the Canon Log 3 gamma for colour grading and HDR video production. It also features a new auto-level function that automatically detects and rotates the image sensor to correct tilted
Photographs. The camera has a 2.36M-dot OLED viewfinder and 1.62M-dot fully-articulating 3-inch touchscreen. It has dual UHS-II SD card slots. 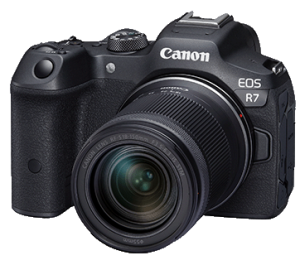