Canon EOS R10 arrived in India on 30th July at a launch event in Gurugram. This mirrorless camera targets the new age content creators and vloggers. This mirrorless camera comes with a new 24.4MP APS-C sensor. R10 comes with a wide range of ISO from 100 to 32 000, which enables it to produce low-noise images in low-lighting. which is capable of up to 15 fps continuous shooting with mechanical shutter with AF/AE tracking, which is on par with the EOS-1D X Mark III’s capability. High-speed burst of 23fps with the Electronic shutter can be very useful in shoots around wildlife and interviews.

The Dual Pixel CMOS AF II, provides autofocus for the entire image and can detect up to 651 frame zone. It comes with recognition modes like humans, animals and vehicles, focusing on areas like eyes and spot focus. The introduction of In-Camera Panorama the camera captures up to 200 shots at a time and merges them to form a high-resolution image. In terms of video the camera records uncropped 4K UHD movies which are processed from 6K RGB data for higher image quality. 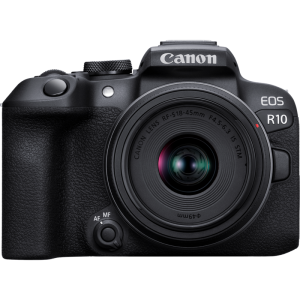