Quote of the Week by Annie Leibovitz 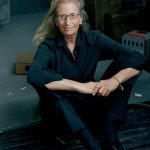 Annie Leibovitz is best known for her engaging and dramatic celebrity portraits. In 1970, she began working as a commercial photographer at Rolling Stone magazine, and soon became the first woman to be named chief photographer. She left the publication and began working at Vanity Fair. She famously captured the last image of John Lennon and Yoko Ono before his death in 1980. In 1991, she became the first woman ever to have a solo exhibition at the National Portrait Gallery in Washington, D.C. In 2008, she authored and published the book Annie Leibovitz at Work, which dissects in detail how some of her most iconic images came to be. Her are held in the collections of the Art Institute of Chicago, The Museum of Modern Art in New York, and the Los Angeles County Museum of Art, among others.