Quote of the Week by Robert Adams 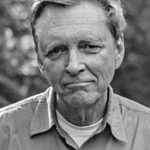 “No place is boring, if you’ve had a good night’s sleep and have a pocket full of unexposed film.” —Robert Adams (1937)

Nature and architecture photographer, Robert Adams, is best known for his works on the evolving landscapes of Western United States. He began his career as a professor of English literature, but soon realised his passion lay in photography, and he took up the art in the mid-1970s. His book The New West (1974) brought his photographic prowess to the limelight, which was later also exhibited in 1975. Some of his other publications include From the Missouri West, Notes for Friends and The Place We Live In. He is a two-time recipient of a Guggenheim Fellowship, and he was given the Hasselblad Award in 2009. In 2014, he was elected to the American Academy of Arts and Letters.