Sangit ghorpade and his teammate decide their shot. Photograph/Sakshi Parikh

After a mind-blowing  photography finale with Dhruv, I didn’t sleep that night because I did not want to miss the super early morning that Sangit Ghorpade gad planned as he made his way around the city and filmed the Mercedes-Benz cars. With Sahil Shah and Hardik Patel set to arrive in a few days, I wondered how taxing their schedules would be.

As I sat groggily in the White CLA, Sangit and his teammate went over every little detail that they wanted to capture in the video they were suppose to make for the finale. We began on an uneven and broken road, where they wanted to show how easily the car handles the terrain. The only difficult part was the slow-moving traffic that turned Sangit from a talented filmmaker to a dedicated traffic manager, as he helped other vehicles manoeuvre around the ditches. Sangit lines up the green A-class for his shot. Photograph/Sakshi Parikh

The most exciting parts of the whole day were the trailing shots. Sangit positioned himself and the camera and dangled from the window, to get the moving shot of the green A-Class. Like a daredevil, he handled this on multiple occasions, on the highway, ghats and around the city.

To capture the sunset, we headed to a hill just on the outskirts of the city. As the sun descended and backlit the cars, I could see them shine against the dramatic clouds, something Sangit had planned meticulously. Post that, we went whizzing around the countryside showing off the speed and finesse of the control that the cars offer.

I found myself nostalgically remembering my childhood. As a tiny tot, I would ask my father to drive our car faster and faster to feel the wind ship about my hair. A ride in the Mercedes-Benz cars as we zipped around the ghats, was like sitting in a time machine. 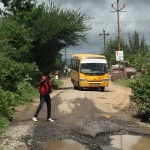 Sangit directs the traffic to stop as he takes his shots. Photograph/Sakshi Parikh 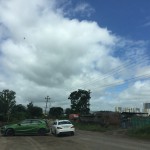 The white CLA and the green A-Class wait. Photograph/Sakshi Parikh 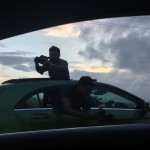 Sangit and his teammate in action. Photograph/Sakshi Parikh