Dhruv Dhakan frames the grey Mercedes-Benz CLA as it drizzles around him. Photograph/Sakshi Parikh

Sakshi Parikh writes about her first time exploring Pune for the Frame the Star Finale!

As a person, I always jump at opportunities that allow me to travel. When I realised I would be going to Pune, a city I’d never been to for the Frame the Star finale, I was thrilled about the road trip that was to follow.

My first time there was enough to make me see the stark differences between Mumbai and Pune, and so did the other participants. To began with, the first batch of participants — Dhruv Dhakan and Sangit Ghorpade were excited and raring to go out and shoot the two cars for two whole days, which is a lot of time and scope to experiment with shots. The next batches with Hillol Choudhury and Anindito Mukherjee were due to arrive over the course of the next few days, and I hoped they would be as excited about the place as well! The goal was still the same, bring out Mercedes-Benz’s thought The Best or Nothing through the photographs and video. Dhruv Dhakan interacts with the drivers to get the car positioned just right for his shots. Photograph/Sakshi Parikh

After scouring the University grounds, he decided to drive up to the beautiful Lavasa City and shoot the cars against the European architecture, where I tagged along with him. Our 3 hour journey was filled with the enticing views of the rich, narrow green ghats. As Dhruv kept shooting along the way, he would endearingly do a little jig as he got that one perfect shot.

As we reached the check point outside of Lavassa, we were that declined entry because of a landslide that occurred a few days ago. Undeterred, Dhruv quickly came up with a new plan and we went back into Pune City while he shot along the ghats. He continued well into the night striving to get his perfect shot.

Pune turned out to be a great destination for the Frame the Star as the participants got an opportunity to shoot the best of both worlds — the city and the calm. With interesting juxtapositions in every city, Pune’s vibrant life was a treat to experience. 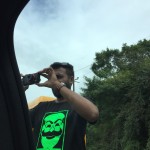 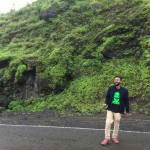 A lighter moment in the finale. Photograph/Sakshi Parikh 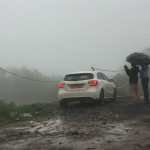