The World of Photo Ads By the 1890s, camera manufacturers realised the power of women as potential camera buyers. Source: www.vintageadbrowser.com

How did someone know of new cameras in the early days? Chandni Gajria goes through print ads that have helped sell cameras.

Kodak’s Revolutionary Slogan
It was in 1888 that Kodak marketed its brand with this phrase mentioned above. This slogan was all that it took to begin the reign of Kodak in the photography world. By 1901, Kodak’s Brownie camera brought photography to the masses. But to say that they were the first to use advertising to promote their cameras would be incorrect. There were many before them who advertised daguerreotypes, plates and other photographic process. But it was Kodak who were able to really stand out with their advertising.

Changing Society
Advertisements during the 1840s–1870s would use an illustration of the camera, information about the device and how it was supposed to be used. A slogan was accompanied by the address of the company or distributor to which one could send a letter to buy the camera. But, as society evolved, people changed, and so did their hobbies. Gradually, women began to try their hand at photography.

Manufacturers started using illustrations of female characters in their advertisements. Since working women were not common in the early 1890s, the illustrations remained confined to a housewife using the camera to photograph their children. Soon, manufactures realised that they could cater to children as well, as they would be as interested in photography as their parents.

Making Cameras Compact
By the late 1890s and the early 1900s, camera technology progressed from huge devices to folding cameras, which were easy to carry around. Slogans for these camera advertisements urged their users to take the cameras outside the comfort of their homes—to picnics, family functions and even abroad. Camera advertisements evolved from illustrations to featuring actual photographs of people using the camera.

In the 1930s, the introduction of Leica’s 35mm rangefinder made the camera small and easy for everyone to use. Minolta, too, latched on to the idea of advertising portable cameras. They began to use slogans like ‘You can watch the day drift by with Minolta’ and ‘Scooter Shooter’ in ads which would also show a person using a camera from the the back of a scooter.

Lightweight, Fast and Reliable
Looking back at the camera advertisements of the past is a great way to study not only how cameras evolved, but also how life evolved too! From advertisements that catered to a very niche audience to including families and women, these advertisements serve as mirrors to how society used to be. Many companies have now started using advertising to one up a competing manufacturer.

Take for instance, a Leica advertisement in German that said ‘Wie lange konnen sie ohne blitz fotografieren’, which means ‘How long can you do without flash photography?’ In fact, even in advertisements today, several companies are constantly competing with other cameras. A recent Olympus ad read ‘A camera phone is to photography what two minute noodles are to cooking.’ Let’s just say that these days, it is easier for manufacturers to pull down a rival camera company in the name of advertisements! Ultimately, these amusing ads sell us our favourite cameras.

Interesting Camera Advertisements Through the Years 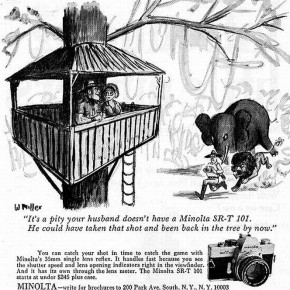 Minolta: A humourous ad for Minolta SR-T 101 shows a husband running away from wild animals while his wife and a man wait for him at a tree house. The ad reads—‘It’s a pity your husband doesn’t have a Minolta SR-T 101. He could have taken that shot and been back in the tree by now.’ Source: www.vintageadbrowser.com

Kodak: Published in the year 1889, the famous phrase ‘You press the button we do the rest’ was the first marketing slogan used by George Eastman to promote the Kodak camera. The slogan has become Kodak’s brand identity since then. Source: www.vintageadbrowser.com 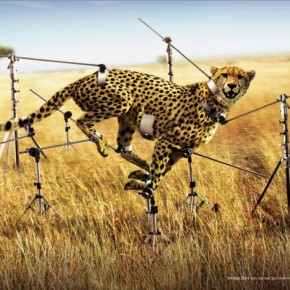 Canon: This is a slightly more recent advertisement for the Canon Digital IXUS 75 compact camera. The advertisement promoted the SteadyShot feature of the camera which is supposed to freeze any action of a moving subject. Source: www.adme.ru 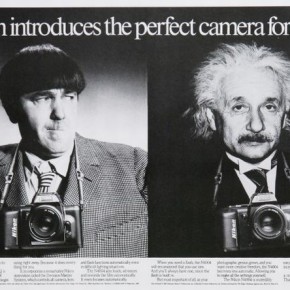 Nikon: This 1987 Nikon advertisement features Moe Howard, one of the Three Stooges and scientist Albert Einstein. The advertisement suggests that the Nikon N4004 camera can be used by anyone—from a ‘stooge’ to a brilliant mind of a scientist. This advertisement works well in conveying the message that Nikon considers every type of customer for their cameras. Source: www.vintageadbrowser.com