Here is a look at the most powerful narratives from the Spot News–Stories category of the World Press Photo 2021 contest. 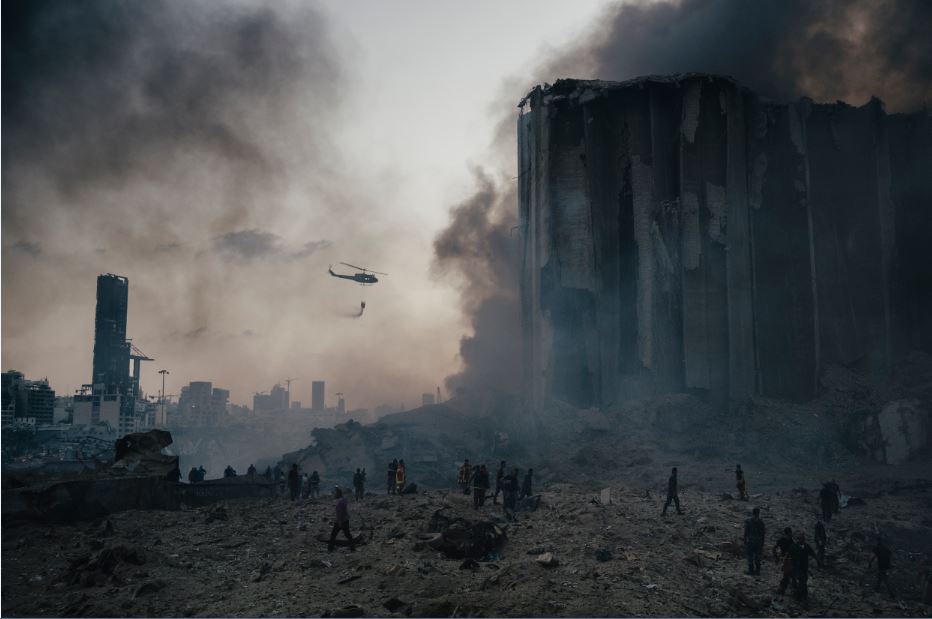 Firefighters work to put out the fires that engulfed warehouses in Beirut, Lebanon, on 4 August 2020, after a massive explosion in the port. Up to ten firefighters died in the blast. 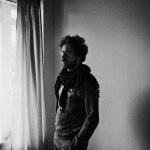 Lorenzo Tugnoli (1979) is a self-taught Italian photographer based in Lebanon who covers the Middle East and Central Asia. He worked extensively around the Middle East before moving to Afghanistan in 2010, where he started working with international media and development organizations. Photograph/Omaya Malaeb

Port Explosion in Beirut: At around 6pm on 4 August, a massive explosion, caused by more than 2,750 tons of high-density ammonium nitrate, shook Lebanon’s capital Beirut. The explosive compound was being stored in a warehouse in the port. Some 100,000 people lived within a kilometre of the warehouse. The explosion, which measured 3.3 on the Richter scale, damaged or destroyed around 6,000 buildings, killed at least 190 people, injured a further 6,000, and displaced as many as 300,000. The ammonium nitrate came from a ship that had been impounded in 2012 for failing to pay docking fees and other charges, and apparently abandoned by its owner. Customs officials wrote to the Lebanese courts at least six times between 2014 and 2017, asking how to dispose of the explosive. In the meantime, it was stored in the warehouse in an inappropriate climate. It is not clear what detonated the explosion, but contamination by other substances, either while in transport or in storage, appear the most likely cause. Many citizens saw the incident as symptomatic of the ongoing problems the country is facing, namely governmental failure, mishandling and corruption. In the days after the blast, tens of thousands of demonstrators filled the streets of central Beirut, some clashing with security forces and taking over government buildings, in protest against a political system they saw as unwilling to fix the country’s problems. 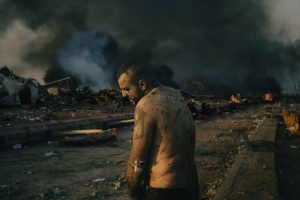 An injured man stands near the site of a massive explosion in the port of Beirut, Lebanon, while firefighters work to put out the fires that engulfed the warehouses after the explosion, on 4 August 2020. 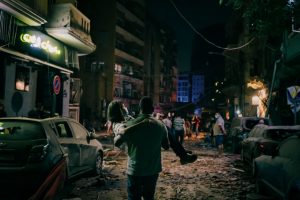 A woman is carried to safety on 4 August 2020, in the devastated Gemmayzeh neighborhood, an historic, predominantly Christian quarter of the city with a high concentration of old buildings. On the first night after the explosion, many cars were unusable and roads were blocked by debris, so injured people had to walk or be moved on foot to safer areas of the city. 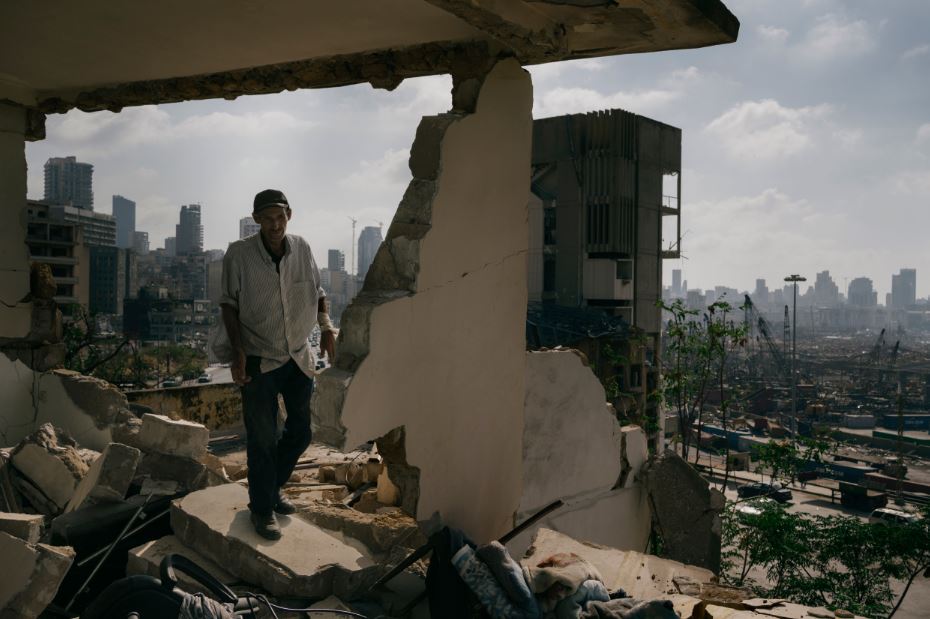 Abdullah Dalloul walks in the ruins of his former home on 14 August 2020, which was destroyed by the blast in the port of Beirut, Lebanon. Following the explosion, he and his family squatted in the damaged building with no water or electricity. 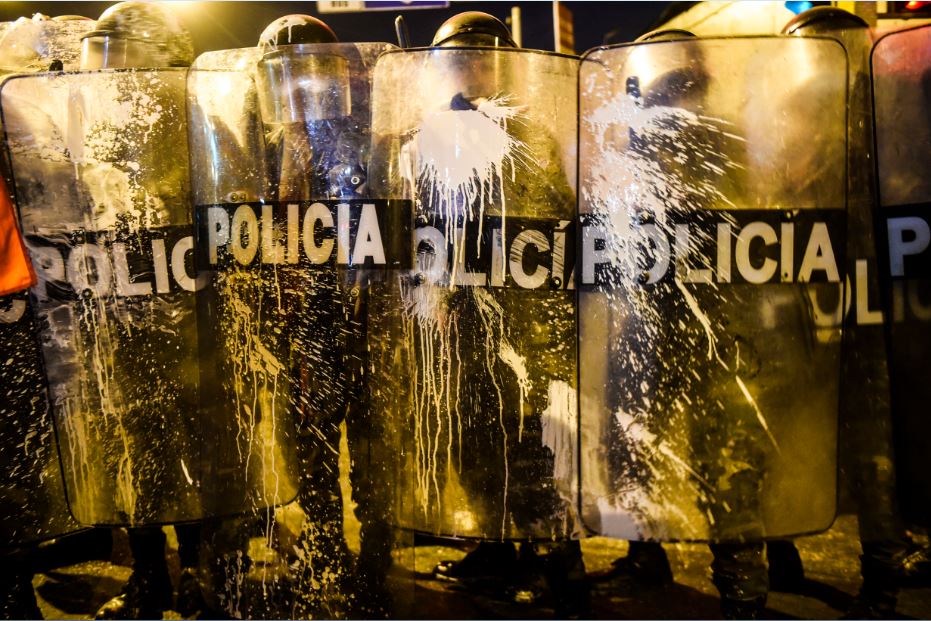 Police form a blockade to prevent protesters from reaching the Peruvian Congress building in Lima, Peru, on 12 November 2020, while the protesters throw paint. 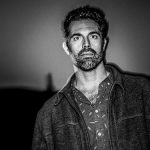 Presidential Vacancy: Peru saw its greatest political instability in 20 years in mid-November, with three presidents coming into power over the course of little more than a week, resulting in massive protests throughout the country. On 9 November, the Peruvian national congress impeached President Martin Vizcarra, condemning his handling of the COVID-19 crisis and alleging that he had taken bribes while serving as a regional governor—a claim he denied. During his tenure, Vizcarra faced opposition from Congress, but amassed wide popularity, especially among Peruvian youth, as an anti-corruption crusader. Crowds began to gather at Plaza San Martín in Lima in protest at Congress’s move, spawning demonstrations in other parts of the country. Congress speaker Manuel Merino was installed as interim president on 10 November, sparking accusations of a parliamentary coup. Protests intensified, and on 12 November a National March occurred throughout Peru, demanding his resignation. On 14 November, thousands of people again took to the streets in a second National March, with many dressed in black. In Lima, two people were killed and more than 100 were injured in violent clashes with police. Manuel Merino resigned on 15 November, setting off celebrations in the streets. A new president, Francisco Sagasti, was inaugurated two days later. 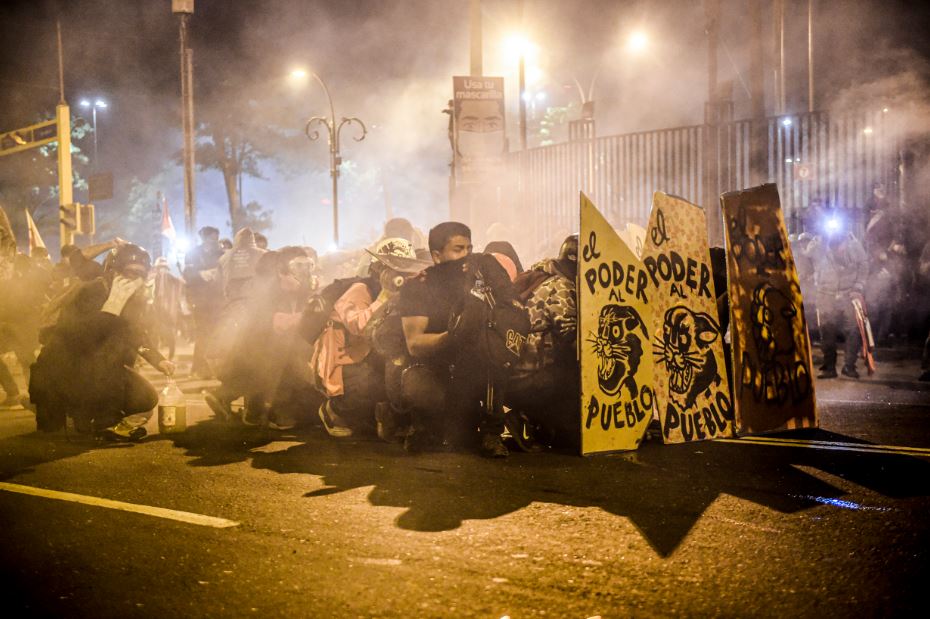 Demonstrators shelter from tear gas and rubber bullets, behind shields reading ‘Power to the people’, in Lima, Peru, on 14 November 2020. 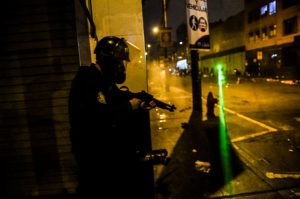 A police officer armed with what appears to be a pellet shotgun stands off against protesters, who try to dazzle him with laser beams, in Lima, Peru, on 12 November 2020. 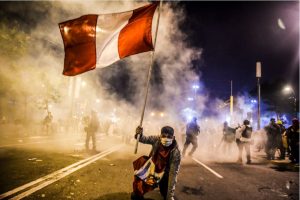 A supporter of ousted president Martin Vizcarra waves a Peruvian flag on Avenida Abancay, in Lima, Peru, on 14 November 2020, in demonstrations that continued past the 11pm curfew imposed due to the COVID-19 pandemic. 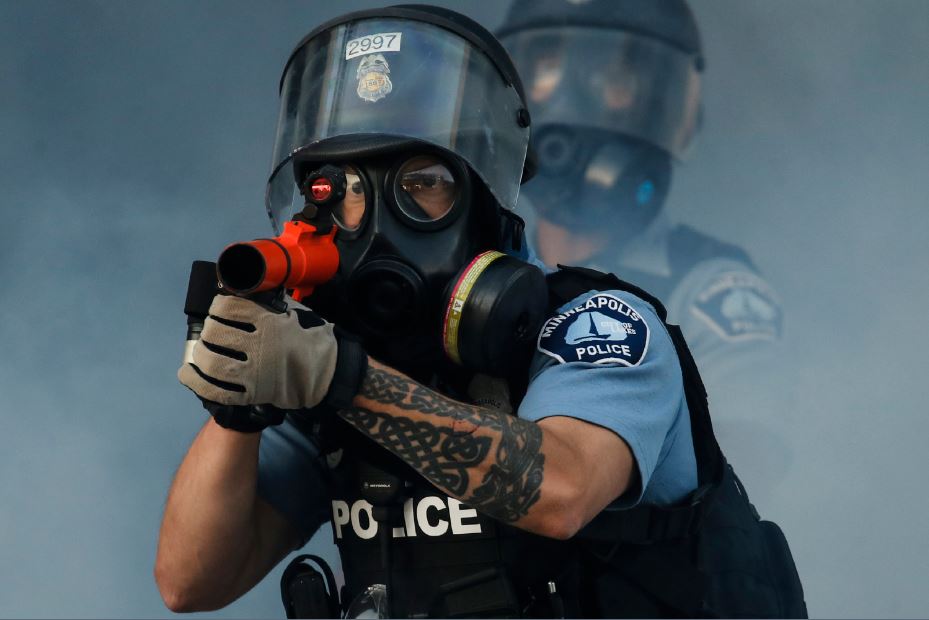 Police fires tear gas on demonstrators at the intersection of East Lake Street and Hiawatha Avenue in St Paul, Minnesota, USA, on 29 May 2020, near the precinct station of the officers who arrested George Floyd. 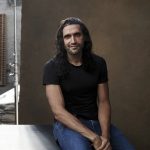 John Minchillo is a staff photojournalist for the Associated Press based in New York City. He joined the Associated Press in 2015 as a solo correspondent photographer in Cincinnati, Ohio, after freelancing for the wire in his native New York beginning in 2011. Minchillo’s most recent coverage includes the COVID-19 crisis, Black Lives Matter protests, and the storming of the United States Capitol on 6 January 2021. Photograph/Victoria Will

Minneapolis Unrest: The George Floyd Aftermath: On 25 May, George Floyd, a 46-year-old Black man, died while being arrested by Minneapolis police in Minnesota, Minneapolis, USA. Four days later, Derek Chauvin, the police officer who had been filmed kneeling on Floyd’s neck for more than eight minutes, was charged with murder. A bystander video of the encounter went viral, setting off protests first in Minneapolis and then around the rest of the country. Thousands of people gathered at a makeshift memorial the day after Floyd’s death, where organisers of the rally emphasized keeping the protest peaceful. Although daytime rallies throughout the metropolitan area were mostly peaceful events, nighttime demonstrations escalated into more extreme action, including looting and arson, in which people who were not part of the protest became involved. On 28 May the National Guard was activated. To many, the violence was an understandable response to years of injustice at the hands of the police. In the months that followed, large protests were held in more than 150 American cities, a nationwide call for racial justice not seen since the civil rights protests of the 1960s. Polls taken in June by four different agencies indicate that between 15 million and 26 million people across the US participated in the protests, making it the largest movement in US history. Protests in support of the Black Lives Matter (BLM) movement spread to more than 2000 cities in some 60 countries worldwide. 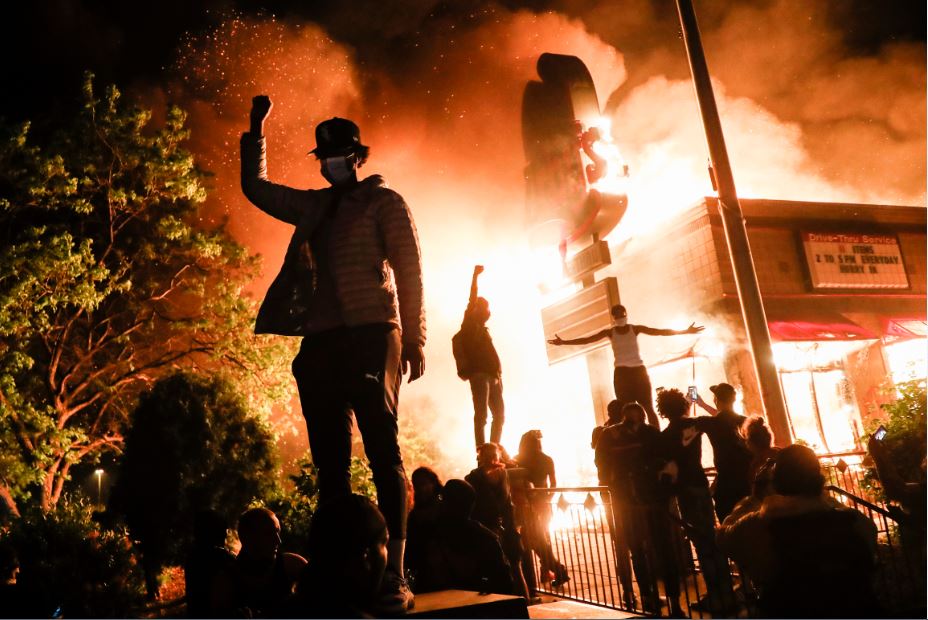 Protesters raise their fists in defiance outside a burning fast-food restaurant near the precinct station of the officers who arrested Floyd, in Minneapolis, Minnesota, USA, on 29 May 2020. 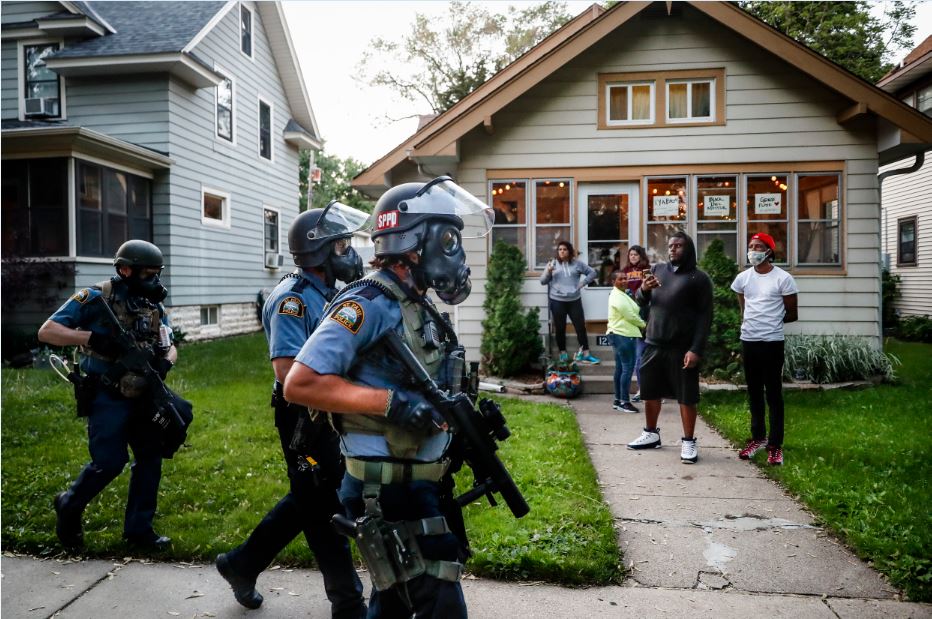 Protesters and residents watch as police in riot gear walk down a residential street, in St Paul, Minnesota, USA, on 28 May 2020. 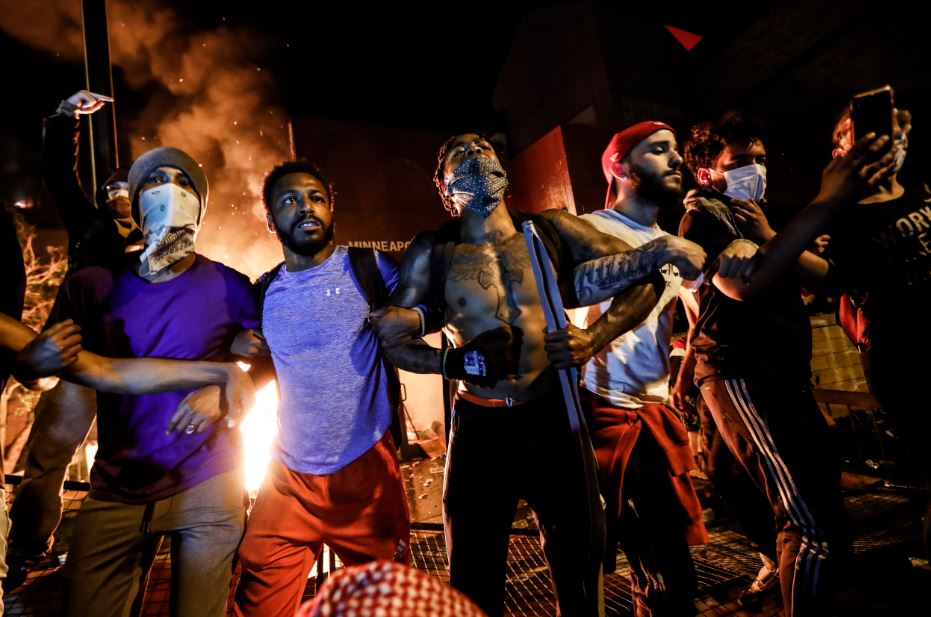 Protesters join arms in defiance during a demonstration outside the burning Minneapolis Police Department 3rd Precinct building, in Minneapolis, Minnesota, USA, on 28 May 2020.