Here is a look at the most gripping visuals from the Sot News–Singles category of the World Press Photo 2021 contest. 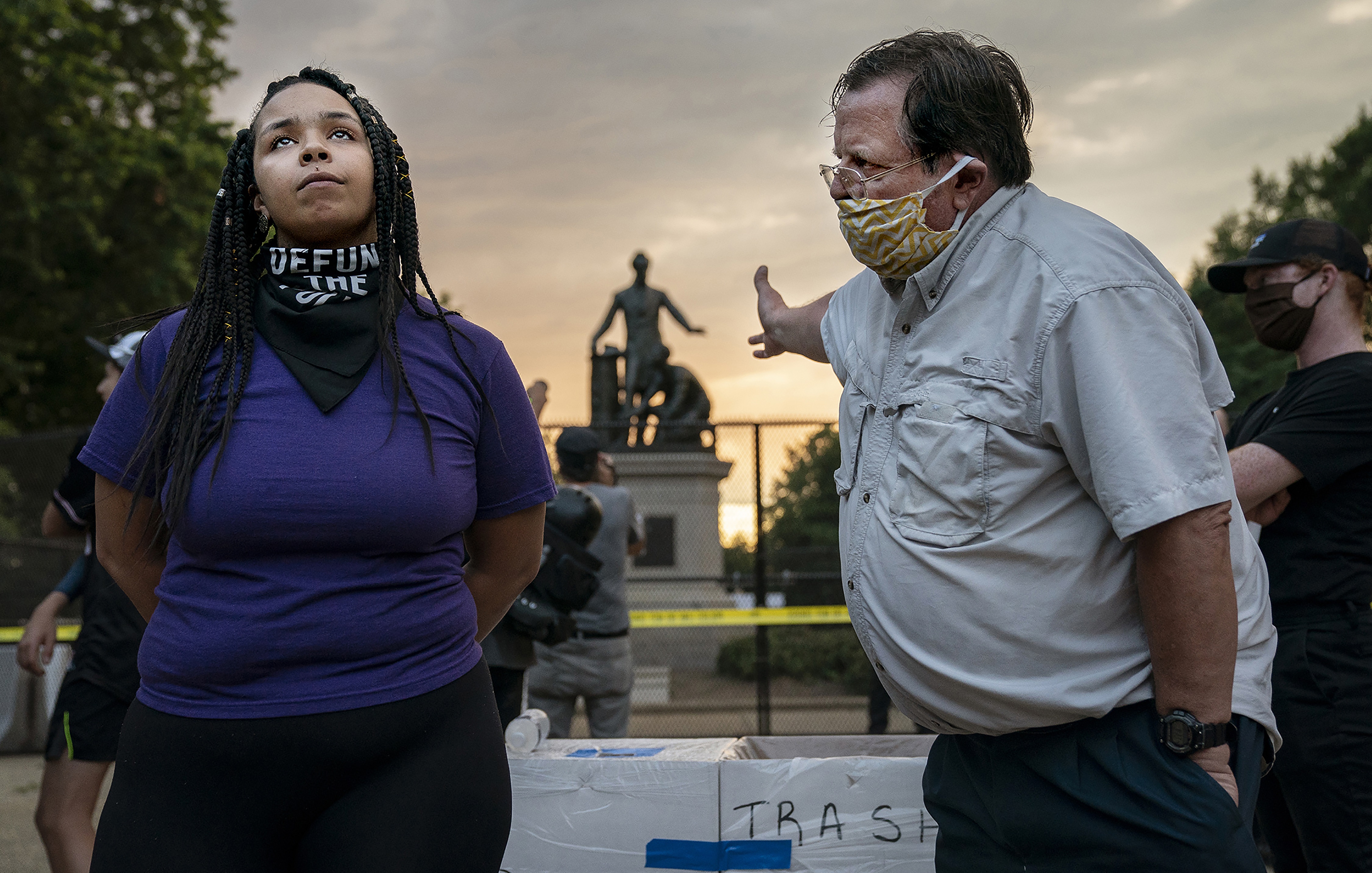 A man and woman disagree on the removal of the Emancipation Memorial, in Lincoln Park, Washington DC, USA, on 25 June 2020. 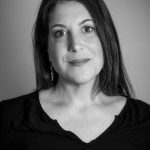 Evelyn Hockstein is a photojournalist based in Washington, DC. She is President of WPOW, the Women Photojournalists of Washington and has worked in more than 70 countries covering civil war, political unrest, humanitarian crises, and natural disasters for The Washington Post, The New York Times, Helsingin Sanomat, and others. Photograph/Astrid Riecken

Emancipation Memorial Debate: The Emancipation Memorial shows Lincoln holding the Emancipation Proclamation in one hand, with his other hand over the head of a Black man in a loincloth, kneeling at his feet. Critics argue that the statue is paternalistic, demeaning in its depiction of Black Americans, and that it doesn’t do justice to the role that Black people played in their own liberation. Those against removal say it is a positive depiction of people being freed from the shackles of slavery, and that removing such monuments can amount to an erasing of history. The drive to remove the statue came amid a wave of calls to take down monuments of Confederate generals nationwide, a move largely welcomed by activists from the Black Lives Matter (BLM) movement, who see Confederate and other such monuments as reminders of an oppressive history. They call for a more honest accounting of American history. Officials had erected barriers around the Emancipation Memorial in advance of demonstrations. Residents posted notes on the fence expressing their views, and on 25 June around 100 people gathered at the monument arguing about what it meant. In February 2021, congresswoman Eleanor Holmes Norton reintroduced a bill in the US Congress to have the statue removed and taken to a museum. 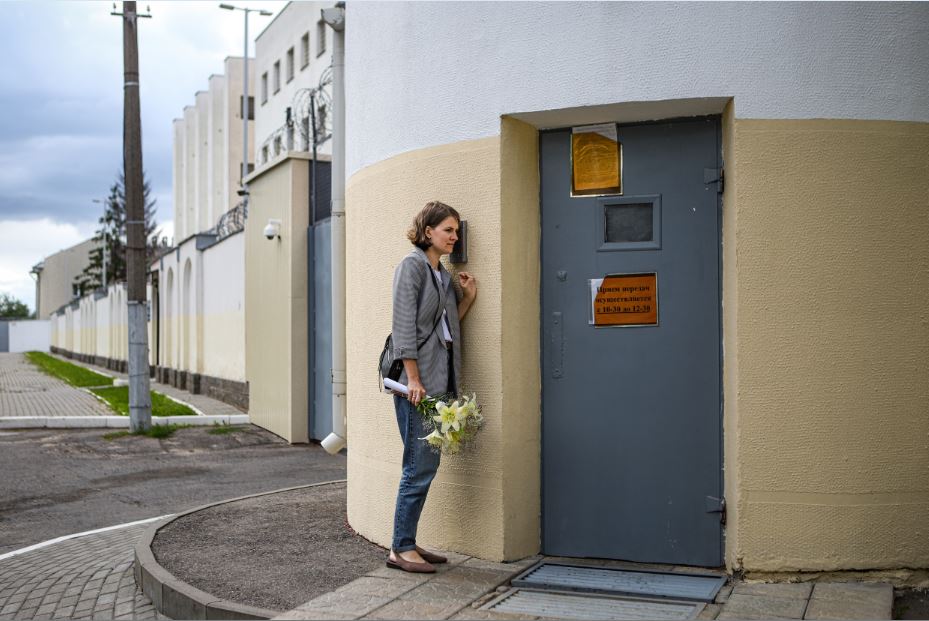 Olga Sieviaryniec waits for her husband Paval outside a detention center on Akrestsin Street, Minsk, Belarus, on 22 July 2020. 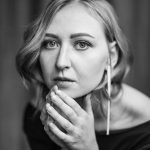 Nadia Buzhan (1991) is a photojournalist from Minsk, Belarus. She graduated from the Institute of Journalism at Belarusian State University in 2014. In her work Buzhan deals with the themes of freedom and religion. Currently, she works for Nasha Niva, the oldest Belarusian newspaper, and she previously worked with Zviazda and TUT.BY. Photograph/Vika Gerasimova

Waiting for Release at a Temporary Detention Center in Belarus: Paval Sieviaryniec had been held on remand since 7 June, and his family had learned he was about to be released. Olga waited outside the prison for two hours, but Paval was not freed. Paval Sieviaryniec is a Christian Democrat politician and a well-known political activist. He is one of the founders of Youth Front, a youth movement supporting civil society based on Christian-democratic principles and the free market, and the education of young people to revive Belarusian national culture and language. He was arrested while collecting signatures in support of candidates to stand against President Alexander Lukashenko in his bid for a sixth consecutive term in office. Lukashenko had been in power since 1994. Dubbed ‘Europe’s last dictator by media outlets, he had frequently repressed opposition, and had not had a serious challenge to his leadership in the previous five elections. Amnesty International considers Paval Sieviaryniec a prisoner of conscience. He was still in prison in early 2021, partly in solitary confinement and unable to meet with a lawyer. He was denied access to books and television, and his Bible was taken from him. 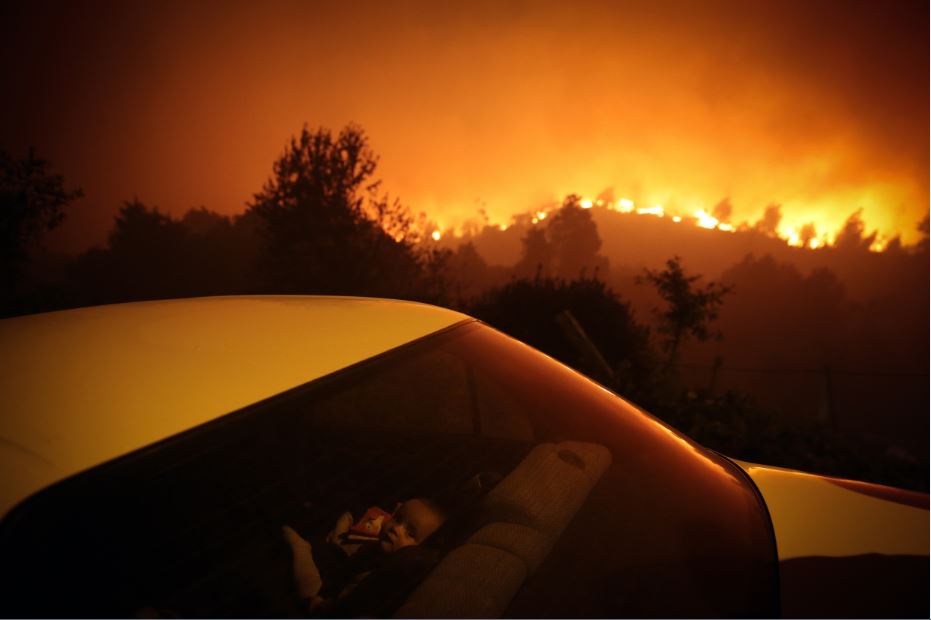 A child sits inside a car close by a forest fire in Oliveira de Frades, Portugal, on 7 September 2020. 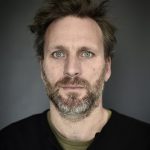 Nuno André Ferreira (1979) is a photojournalist from Leiria. He began his career as a photographer at the Press Office of the Municipality of Leiria.  Ferreira also worked with Jornal do Centro between 2006 and 2012 and has been working with Agência Lusa and European Pressphoto Agency since 2009. Photograph/Elsa Monteiro

Forest Fire: A wildfire began in Oliveira de Frades, about 100 kilometers from Porto in eastern Portugal, on 7 September, and spread some 30 kilometers west, to Sever do Vouga, and 40 kilometers southwest, to Águeda, in the neighbouring district. At least 300 firefighters, 100 land vehicles and ten firefighting planes battled the blaze in a landscape dominated by eucalyptus trees. The uncontrolled spread of eucalyptus trees—which supply raw material for an economically important pulp industry, but which are extremely flammable—are a major factor in the rapid spread of wildfires. Portugal has a wildfire season lasting from June to September. Its hot climate, consistent warm winds coming off the Atlantic, and a well-forested landscape make it particularly susceptible to fire. Extreme temperatures and severe drought contributed to the 2020 fire season. A 2020 report released jointly by the Portuguese Association of Nature and the World Wide Fund for Nature states that Portugal is the European country worst affected by wildfires: more than three percent of its forest burns every year.